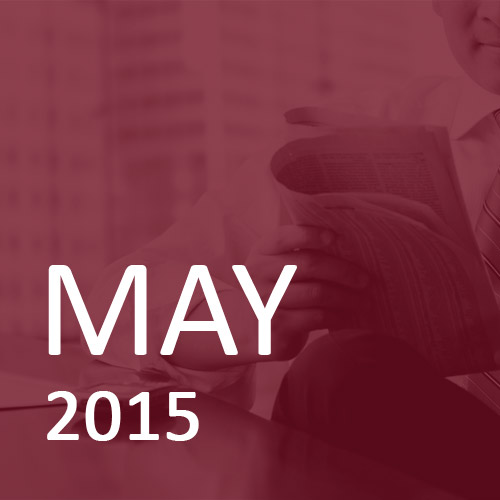 Stockmarkets around the world hit new highs but failed to hold these levels. In Japan the Nikkei closed above 20,000 for the first time in 15 years, the US S&P 500 and NASDAQ indices made new highs and here at home the FTSE rose briefly above 7100. However, by the end of the month indices were scattered closely either side of break-even.

In bond land the European Central Bank’s buying programme (QE) drove yields to new lows with the German 10-year bund yielding a paltry 0.06%. At one point 82% of European bonds were yielding less than 1% and 30% of Eurozone government debt was trading on negative yields. In a bizarre end to the month, as the Euro broke above $1.10, the German equity market suffered its largest 1-day fall since 2008 and the 10-year bund crashed; it’s currently yielding 0.53%.

April marked a month of minimal deflation worries. The annual inflation rate in the UK remained unchanged whilst the US and Germany noted the smallest of rises. The 13% rise in oil prices also concentrated the minds that falling consumer prices weren’t a one-way bet.

In the US the Federal Reserve continued to confuse with a disparity of views suggesting a start to the rate-hiking process any-time between June and next spring.  There was further ambiguity at their subsequent meeting when members noted the recent weakness in growth (Q1 GDP of +0.2%) but wouldn’t rule out a rise in rates next month. Meanwhile Russia and Australia cut their borrowing rates to 12.5% and 2% respectively and China announced an easing in reserve requirements for its banks. David Cameron became the first UK Prime Minister since Clement Attlee to preside over a full term of unchanged rates.

We have held the view for some months that markets would be more volatile in 2015. Rapid moves in either direction are the product of several factors:
Most asset classes are, at best, fully valued and many are discounting an unreasonable amount of good news.
Many investors realise this but are unwilling to jump off the gravy train first in case they miss out as the central bank buying continues.
There is an alarming lack of liquidity in markets. This means that even fairly small buy or sell orders can have an exaggerated impact on asset prices.

This is resulting in a variation of the old children’s game, “Look behind you Mr. Wolf,” where investors will continue to follow the markets as they rise but run for cover as soon as they show signs of turning around.

With little to no risk priced into government bonds we expect further sharp reactions to any hint of future inflation. On the other hand the ECB has a large wad of money to squeeze those investors tempted to go short of bonds. So bonds are too dear but the short-term direction is tough to call.

Our concerns that growth in the US might be stalling stand; this past month witnessed an ugly slowdown in GDP for the first quarter and the largest trade deficit since October 2008. Whilst we accept that next month might offer favourable revisions this data reflects our concern that the strong dollar is favouring cheaper imports over domestically-produced goods.

In a broadly flat month our holding in Russia on the higher-risk funds returned a gain of 11.80%.

With the level of central bank manipulation it’s impossible to call the top in any market, but we expect a reversal at some point and are keeping a portion of the portfolio in low-risk absolute return funds ready to switch into good long-term investments when opportunities arise.