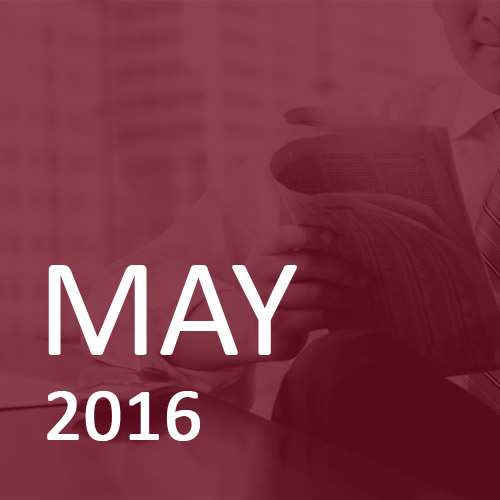 In general, economic data continued to disappoint with first quarter growth estimates from the UK and US failing to meet expectations, though the EU fared better. In the UK the industrial sector fell into a technical recession with much of the blame falling on orders and projects being postponed ahead of June’s EU Referendum. Whilst this makes some sense it doesn’t explain the weakening growth in the US, Japan or Europe. The International Monetary Fund warned that the global economy faced the threat of a ‘synchronised slowdown’ and reduced their growth forecast for 2016% to 3.2%.

A stronger month for mining and oil stocks helped push the FTSE 100 nearly 2% higher, better than most stock-markets. Currencies influenced other returns with a strong Yen translating a weak Japanese stock-market into a 1.9% gain and the weaker US dollar producing a stock-market loss of nearly 3% in sterling terms. Despite the weaker US dollar and stronger commodity prices most emerging markets ended the month flat to a small negative.

Little excitement emitted from the major central bank meetings. The European Central Bank, Bank of England and US Federal Reserve all waved through no changes in rates as expected, but the Bank of Japan did cause an upset when they followed the same course of inaction despite lowering their projections for domestic growth and inflation; the Nikkei index fell by 4% and the Yen rose sharply.

In the fixed interest markets yields continued to fall with, unusually, Japan leading the way to record lows. With 75% of Japanese government bonds now ‘offering’ negative yields (i.e. investors can guarantee a loss at purchase) investors are now looking for higher returns from overseas bonds. Such is the demand for income that serial defaulter Argentina was able to issue $15 bn of debt.

The quantitative easing programme was instigated to raise expectations of future inflation and thus stimulate an appetite for growth. The unspoken objective was to achieve this by causing the currency to weaken thus making domestically-produced goods more competitive. Since introducing QE both Japan and the Eurozone have failed to ignite even a spark of inflation and both currencies are now higher on a trade-weighted basis. The concern is that despite this monetary stimulus, together with lower oil prices, growth in the Eurozone has been no more than tepid. Now, with a stronger currency and oil prices 75% higher than in early February that task looks harder still.

Financial markets are now confidently assuming that there will be no global interest rate rises for at least this year, and in some countries for years to come. Whilst this may prove to be correct we feel that the risk/ reward favours taking the opposing view and being placed to benefit from a surprise rise in inflation.

Talk about uncertainty over global growth and the increased volatility of markets has become a bit of a stuck record; even policymakers and central bankers don’t know the answers. The US Federal Reserve used their latest meeting to signal that concerns over global economic and financial hazards had eased (the oil price was higher and China hadn’t gone bust). But in the next breath they noted a slowdown in US growth which, whether temporary or not, would have been hard to miss. Meanwhile, the US stock-market is just a shade off its record high despite corporate earnings continue to fall.

June promises to be an interesting month; it will see the next-up meetings of the European, US and Japanese central banks, followed closely by the UK referendum and Spanish elections. All, or any, of these will be capable of increasing volatility across financial markets.

After the strong rally in gold stocks we reduced the weighting on our higher-risk funds. We still favour gold as a hedge against central bank mismanagement but felt it prudent to lock in some gains.

With bond yields at, or close to, record lows we switched part of the corporate bond exposure on our lowest risk portfolios into the Standard Life Short Duration Global Index-Linked fund. This fund is less exposed to changes in yield and provides some protection against a future rise in inflation.

It’s hard at the moment to find areas of the market that are outstandingly cheap; over the long term commodities and emerging markets might still have a lot to offer, but they’ve performed well so far in 2016. For the moment we’re happy running defensive portfolios whilst looking for opportunities during the volatile periods.