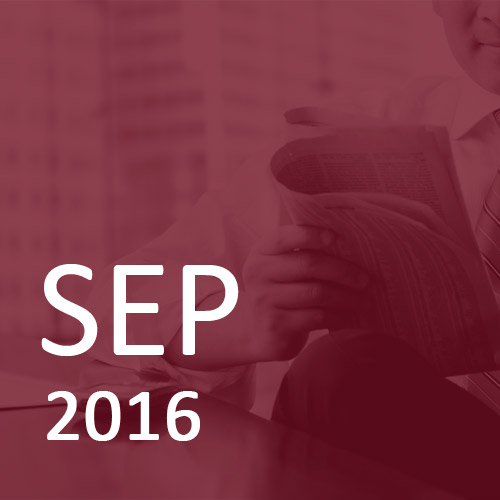 A ‘summer truce’ was struck across markets, allowing investors to forget the economic and political worries and take an August break. Stock-market volatility, as measured by the VIX index, was the lowest for over a year as shares and bonds quietly edged higher. Developed markets rose by between 1-2% with the S&P 500 briefly making another record high. Fixed interest continued to perform well, buoyed by central bank buying.

The UK witnessed a strong rebound in economic survey data; the same series that caused post-referendum panic last month showed record monthly gains as readings signalled a return to growth in the economy. Unfortunately, the subsequent release of July’s weaker manufacturing data took some of the shine off sentiment and the currency.

At the financiers’ summer camp in Jackson Hole, Federal Reserve Governor, Janet Yellen, said that the case for a US rate hike had strengthened over recent months on the back of a solid performance in the jobs market and a better outlook for economic activity. Data from the US remain mixed but the recent weaker jobs number might just tip the scales in favour of leaving rates alone for September.

Spain is still unable to decide on a ruling party and will now require a third election. This fills the void until the Italian referendum on Constitutional reform in October and US presidential elections in November.

There is currently a complacent view of ‘lower for longer’, whether that be growth, inflation or interest rates. The overall level of global debt may well mean that this continues to be the case, but the amount of ammunition that central banks are firing to get growth and inflation higher is without precedent; the fact that it’s failed so far isn’t a reason to dismiss the prospect of rising inflation going forward.

The sharp rebound in UK survey data (the Purchasing Manager Indices) partly reflects last month’s emotional over- reaction to scare stories over the Brexit vote. It might also indicate a more favourable trading outlook as a result of the weaker currency. More tellingly, it makes Bank of England Governor Mark Carney’s immediate ‘rate cut plus’ package look a tad hasty!

Sentiment in the UK has done a ‘three-sixty’ from discounting Armageddon to welcoming this Brave New World outside of Europe. In reality both reactions lack credibility as little has changed so far. Policies have yet to be agreed and serious negotiations look set for 2017 at the earliest. So, apart from a lower currency and the shelving of some investment projects any real insight into how our economy adjusts will be months away at the very least.

Across the English Channel things are shaping up for a very interesting year with a growing political disquiet with incumbent leaders. Next month sees an Italian referendum on constitutional reform proposed by Prime Minister Renzi; a failure to gain sufficient votes might be deemed as a vote of no-confidence opening the path for the euro-sceptic Five Star party. In 2017 both France and Germany have political elections; President Hollande currently commands a record low 10% popularity rating and Chancellor Merkel’s party were third-placed in last week’s local elections. This political uncertainty will at times provoke speculation of an EU break-up and could also influence divorce negotiations with the UK if Eurocrats look to make an example of those that exercise democracy.

We made no changes to our portfolios over the month. The rally across equity markets has been stronger than we anticipated but we expect volatility to pick-up going into the autumn.

We continue to view fixed interest bonds as offering little reward for the risk of capital loss and prefer a combination of property, absolute return funds and equities.

The temporary suspension of dealing in commercial property funds remains in place, although valuations have started to edge higher again. Given the exuberance across other asset classes we regard property, along with gold, as a useful diversification of risk.

Gold gave back some of the year’s gains but remains a useful hedge against the perceived failure of central bank policies and the general uncertainty ahead.