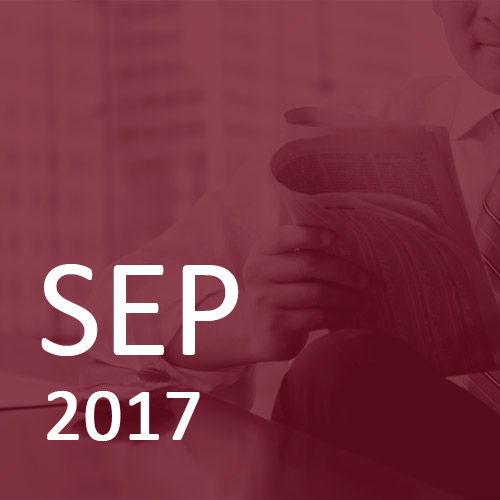 A month of generally supportive economic data lent an underlying bid to stock-markets, though the mood was soured on occasions by terrorist attacks in Spain and raised voices from Messrs Trump and Kim Jong Un. Towards the end of the month the arrival of Hurricane Harvey brought concerns that the reduced supply of oil and gas would lead to price rises.

Developed markets fluctuated between flat and up 2-3% throughout August; the US, Europe and Japan all rose by around 2.5% in sterling terms, whilst the UK put in a more subdued performance of 1.5%. Asia and emerging markets fared better, showing gains of 3-4%. Bond markets witnessed the rarity of government bonds rising by more than those issued by companies.

Central bankers reined back on signalling any immediate tightening of monetary policy. The US Federal Reserve board were split over the inflation outlook, with some members concerned about risks to the downside. The UK’s Monetary Policy Committee voted 6-2 in favour of holding rates, and cut their forecasts for economic growth. The European Central Bank’s concern over the strength of the euro, trading at a trade-weighted 2-year high, lessened the likelihood of any near-term tightening. A notable exception was the Bank of Canada, raising rates by 0.25% in early September.

This week saw US politicians cobble together a deal for a temporary rise in the government debt ceiling and agreement to fund the government until mid-December. Although largely taken for granted this action was necessary to prevent both the possibility of the US defaulting on its debt and the shutdown of its government which, at the very least, would have denied aid to victims of the hurricanes.

Current investment markets are full of contradictions; equities remain firm and within a few percent of their all-time highs, buoyed by firm economic growth and improving earnings numbers; data released this week showed the global manufacturing PMI index at a 75-month high. Meanwhile, fixed interest bond yields are falling again with UK and US 10-year bonds yielding 1% and 2.05% respectively. Bond market prices currently imply no chance of a US interest rate rise in September and only a 1 in 3 chance of a rise before the year end. This move would normally be associated with fears of an economic slow-down and yet the average yield on a European high-yield bond is a mere 2.4%-to emphasise, that’s a return of just 2.4% on junk!

Putting aside geopolitics for a moment the US is suffering a battering of Biblical proportions. Hurricane Harvey has left damage estimated in the billions of dollars, with the threat of Irma, Jose and Katia still to come. Meanwhile the west is under attack from multiple wildfires stretching from Washington state to California. Whilst acknowledging the devastation to thousands of households, on an economic level data over the next few months will need to be viewed with caution. This might lead an already cautious Federal Reserve to postpone further tightening.

We still expect a market correction at some point-we still have no idea when this will happen! Currently we’re witnessing two highly unstable leaders playing a game of chicken with a nuclear button and yet there’s been no more than a token mark-down in prices, often reversed a day or two later. This gives some indication of the complacency of an investor base comforted by the knowledge that central bank asset purchases are unlikely to finish any time soon, even if the size is reduced slightly around the turn of the year.

Our portfolios benefitted from their weighting in the Blackrock Gold & General fund, which rose by over 6% in August. In addition, our recent purchase of Guinness Asian Equity Income gained 6.7% over the month.

As uncertainty over wider geopolitical, meteorological and economic issues continues we anticipate an interesting and possibly volatile autumn. We’re maintaining diversified portfolios with the capacity to take advantage of opportunities when they become available.