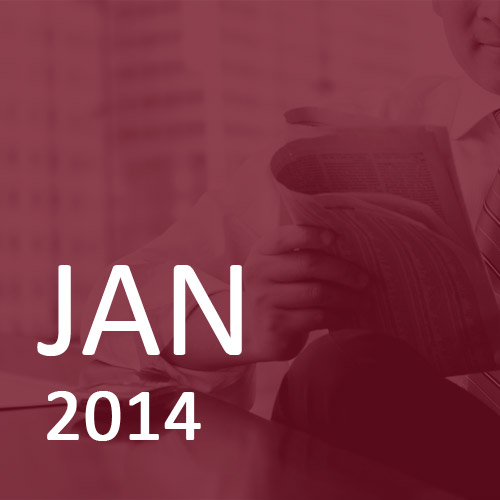 Happy New Year and welcome to the first of our monthly market updates. Whilst you are free to make contact with us at any time we thought that it might be useful to keep you informed of our investment views and how we are positioning your investments to take advantage of changing market conditions.

This could turn out to be a challenging  but exciting year. It’s generally agreed that the main focus will be on how well the US and UK economies cope with further tapering of quantitative easing (QE) and rising interest rate expectations.  History suggests that at least one of the central banks will make a hash of it; the question is whether this will result in a return to recession or inflation rising out of control.

We will also want to see how the ECB reacts to the prospect of deflation, if China oversteps the mark in managing down its growth and whether emerging markets will rise phoenix-like from the ashes to be this year’s star turn.

But the far more interesting bit is the dichotomy of views on most of the major markets. Whether it’s the major developed equity markets or fixed interest markets, there are well-reasoned arguments that they are either mid-way through a longer bullish trend or that they’re over-priced and set for a significant correction. To a lesser degree emerging markets and commodities either have further to fall or they’re cheap and the best contrarian bets for 2014.

The US and UK economies look in good shape, though both will best tested by further withdrawals of central bank money and rising bond yields this year.

It might sound a touch cynical but we think the UK will continue its recovery into the 2015 General Election; George Osborne will issue his own forward guidance to the Bank of England on when he expects rates to start rising-and not before!

The tricky bit is that even if these economies do continue to grow, quite a lot of that is already priced into the stockmarkets. So really we need better than expected growth and for this to translate into higher earnings to drive share prices higher.

Bond yields are still too low, but we don’t subscribe to the Armageddon school of thought; there’ll undoubtedly be volatile periods but yields might only end the year at around 4%, perhaps even a bit less.

Europe is a hard one to call. There’s no denying the quality of many European companies operating profitably across the globe; on the other hand the Eurozone is a failed political experiment that has only been bailed out by the world’s greatest poker player.  In July 2012 Head of the European Central Bank, Mario Draghi said he would do whatever it took to protect the Eurozone from collapse and still no-one has called his bluff.

We think that markets will be far more volatile this year and feel that these setbacks could present useful buying opportunities.

On our lower-risk portfolios we prefer a blend of equity income, property and absolute return funds to fixed interest assets.

Across the balanced and higher-risk portfolios we remain invested in the main developed markets but with less money in Europe.

We believe that there’s more mileage in Japanese and Asian equities. We also feel that emerging markets offer more value going forward and added to our position in November.

We have retained a small weighting in gold and commodities.