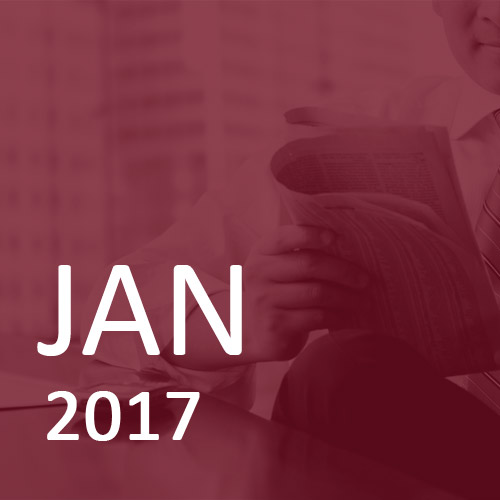 The past month has seen stock-markets driven by a mix of good news and perceived good news. Initially shares were boosted by the prospect of a Trump-led fiscal stimulus package, but recent positive economic data suggested a general pick-up in global growth.

Investors and cliché-lovers were rewarded with a good old-fashioned Santa Rally; developed stock-markets rose by 3-6% during December and have, year-to-date, added a further 2-4% with major indices in the US and UK repeatedly making record highs. Emerging markets and fixed interest bonds also made positive contributions.

The universally recognised Purchasing Manager surveys pointed to the strongest global manufacturing prospects in 3 years, supported in most cases by strong intentions in the service sector. In the UK, a buoyant service sector pointed to fourth quarter economic growth consistent with pre-referendum levels, defying the gloomy expectations of a Brexit-driven slowdown.

The US Federal Reserve raised interest rates by 0.25% as was widely expected, but surprised markets with their forecast of three, rather than two, further rises in 2017. The subsequent minutes pointed out that greater uncertainty over President-elect Trump’s policies would impact the likely pace of rate rises. The European Central Bank voted to extend its Quantitative Easing programme until the end of 2017, although from April the monthly amount of purchases will fall from E80bn to E60bn.

Years of deflation worries and the ‘lower rates for longer’ mantra have changed to one of rising inflation and firmer interest rate expectations. One example is China, which for years stood accused of exporting deflation, but now shows producer price inflation at over 5% year on year. The US apart, it’s hard to see interest rate hikes in the developed world this year, but the mindset is changing. However, we feel that markets have got a bit too carried away in the short term. We’re not arguing with the more optimistic outlook, merely cautioning that concerns remain.

The UK remains emotionally divided over Brexit and unfortunately that leaves parties of either side less prepared to view the economy dispassionately. Just like the drunk with the lamp-post, both sides use fresh economic data for support rather than illumination! As things stand, the Remain scaremongers have much egg on their faces; the Bank of England’s chief economist even had the grace to admit this. But in reality, little has changed, other than a markedly weaker currency. Ongoing growth has been driven, once again, by consumer spending rather than companies investing in future business expansion. Business uncertainty is likely to increase once Article 50 is triggered and protracted negotiations begin.

Regardless of their feelings for the man, investors have whole-heartedly bought into the Trump ideal of America First; the US dollar made a 14-year peak and shares hit record highs on the belief that Trump would deliver on his fiscal package and returning jobs to the US. Our concerns are firstly, that with the US already delivering steady growth Congress may decide to limit the level of stimulus and, secondly, that the benefits of fiscal measures take a matter of years to materialise-will investors remain that patient?

Asides from these two major concerns, Europe has multiple elections throughout the year, China is teetering on a debt mountain and we have no idea of the global ramifications or either a Trump-Putin alliance or a US-China trade war. On the positive side, interest rates will remain historically low, leading savers to still seek income-producing alternatives. With literally billions of pounds leaving UK equity funds during 2016 there’s probably quite a chunk sitting on the side-lines waiting to be re-invested.

The portfolios remain unchanged through the festive period, but we’re currently researching a couple of new opportunities.

We continue to favour gold as a hedge against a change in market sentiment.

We still prefer equities to bonds over the longer term. Having said that, we feel that in the near term there’s a risk that markets have over-shot and that a correction in equities could send bond yields lower. On our cautious portfolios we have set a target at which we’d look to slightly reduce our under-weight position in bonds (these portfolios would naturally have a higher fixed interest weighting).