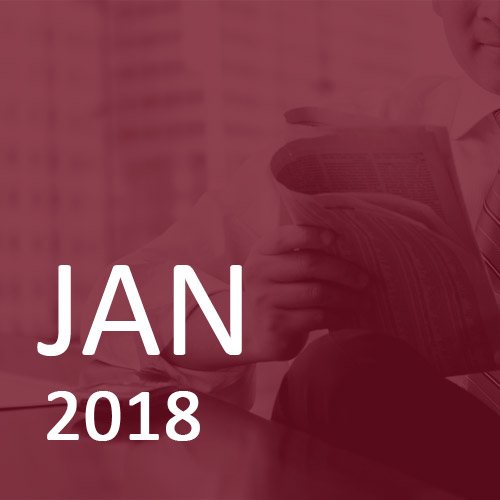 The Santa rally pressed on into early January with record highs in the UK, US and parts of Europe; the Japanese stock-market returned to a multi-decade high. In sterling terms, the UK made up lost ground, gaining over 5% in December; Europe made a little over 2% and Japan and the US were 1% higher. UK fixed interest ended the month around 1% higher. Gains in the first week of January added a further 3% to Japan and emerging markets, and around 2% to the US, Asia and Europe.

In central bank land the European Central Bank raised its forecast for economic growth in the region, commenting that they were certainly more confident than they had been two months earlier. The US Federal Reserve raised interest rates by 0.25%, as expected, upped its growth forecast for 2018, and signalled the likelihood of a further three rises this year. Consumer price inflation remained muted across most developed economies.

In stark contrast, forecasts of growth in the UK continued to decline whilst Governor of the Bank of England, Mark Carney, had to write a special Christmas card to the Chancellor explaining why inflation had exceeded its 2% target by over 1%.

President Trump succeeded in steering through his tax-reform package which was expected to boost the US economy, though members of the Federal Reserve admitted that they were uncertain as to the magnitude.

The soap-opera that is Brexit claimed a ‘major success’ for Theresa May in securing agreement to enter the next phase of talks. This triumph showed just how easy negotiations can be when agreeing to all the EU’s demands. Getting the eventual package approved by the UK’s parliament is likely to be a tougher challenge!

Last year was one of the most tranquil in history, with equity volatility falling to 50-year lows and bond market volatility the lowest in 30-years. Various explanations have been offered ranging from the ongoing safety mechanism of central bank buying to the increased use of passively-run funds designed to indiscriminately buy shares across the market.

One key change in 2018 will be central bank tightening; for the first time in decades, the Fed will end 2018 with a smaller balance sheet than it started the year with. Economically, central bank tightening is aimed at keeping things as they are-steady growth with inflation under control. In financial markets, the consequences are less clear. Gradual withdrawal of QE will test markets; as this is likely to be driven by stronger growth/ higher inflation equities could still be ok; the outlook for bonds is far less certain.

For several years shares have climbed a steep wall of worry but recently the mood music has changed. Many commentators are now prepared to look through global monetary tightening and worrying geopolitical concerns at improving earnings and steady growth. The consensus view is that monetary tightening will continue to be well-signalled, very gradual and erring on the side of not upsetting the growth train.

In the past such euphoria would be the signal to trade the other way, switching into bonds and cash. However, with bonds looking more vulnerable than equities, and cash paying next to no income, the decision is less clear-cut. It could be that stock-markets continue to grind ever higher but it might also mean that, in the event of a negative surprise, there is an undignified rush for the door with investors battling to exit positions.

We still expect a correction at some point and feel this would be a healthy reminder that markets aren’t a one-way bet. However, we appreciate that an environment of steady growth with low inflation will continue to attract investors seeking returns above those offered by cash deposits.

Our recent switch from Blackrock Gold & General fund into the Old Mutual Gold & Silver fund paid off with the exposure to silver generating a 4% out-performance over the month, an 8% rise overall.

Our emerging market fund had a good month, gaining over 4% in sterling terms.

The higher-risk portfolios benefitted from their exposure to bio-technology and agricultural funds.

We’re continuing to run diversified portfolios, with lower exposure to bonds, and with the capacity to take advantage of opportunities when they become available.