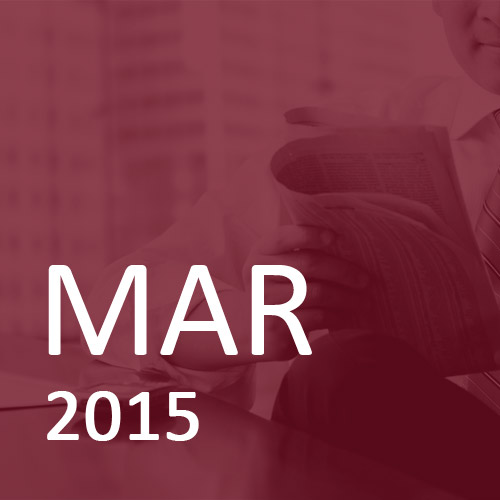 The past month has witnessed dizzy new highs in the UK, US and some European stockmarkets as the US dollar climbed to a 12-year high on a trade-weighted basis. Russian equities gained a further 13% in Sterling terms whilst Japan, Europe and the US rose by between 2-3%.

Interest rates around the world have continued to track inflation lower, although the most notable exception is the United States where, despite inflation falling to -0.1%, interest rates are expected to rise during the summer in response to further falls in unemployment. In the UK the latest Inflation Report conceded that core inflation was likely to turn negative in the spring.

On the face of it the Greek government was unable to hold the steely Germanic stare and blinked first. A bailout extension was agreed as the Greeks rolled over and played submissive but later told their electorate that they had crossed their fingers when promising to repay their debt. This one will continue to run with the Germans showing little compassion or patience.

Finally, Happy 6th Birthday to 0.5%; the official UK interest rate has remained at this level since March 2009.

Markets remain difficult to predict. Valuations suggest that both equities and bonds are more than fairly valued. However that was much the case a year ago and that hasn’t prevented markets from climbing. Whilst central banks continue to manipulate markets it’s a brave move to bet against them and sitting in cash waiting for a market fall requires plenty of patience.

The ECB’s decision to restrict bond purchases to only those yielding more than the official interest rate of -0.2% could lead to a sticky situation for the German central bank. The majority of eligible German bonds are short maturities and these have negative yields as far out as 7 years. The ECB might be forced to either push the interest rate further into negative territory or to start buying investment grade corporate debt.

We have concerns over the continued strength of the US dollar. Firstly, this is hurting US exporters with manufacturing orders now in decline for six consecutive months. Secondly, the world is riddled with debt and a large amount of it is denominated in US dollars so it’s getting bigger by the day. And thirdly, historically a strong dollar has seen a withdrawal of money from emerging markets, leading to a collapse in local stocks, bonds and currencies. Although many countries are better prepared this time with larger currency reserves and more debt denominated in local currency there’s still a shadow over the sector.

We’re currently invested in 2-3 absolute return funds; they offer exposure to strategies that we wouldn’t normally get and have all made positive returns year to date. We’re pleased that the funds are obviously running different strategies as this helps to diversify risk further across the portfolios. It’s worth noting that these types of funds don’t rely on rising markets to make a positive return.

Whilst we prefer to be underweight in fixed interest bonds our holdings in funds like the TwentyFour Dynamic Bond fund have been positioned to benefit from QE bond buying in Europe.  This fund has gained over 4% year to date.

The year has already seen an increase in volatility across asset classes, although this has been mostly biased to the upside. We expect a reversal in markets at some point and are keeping a portion of the portfolio in low-risk absolute return funds ready to switch into good long-term investments when opportunities arise.