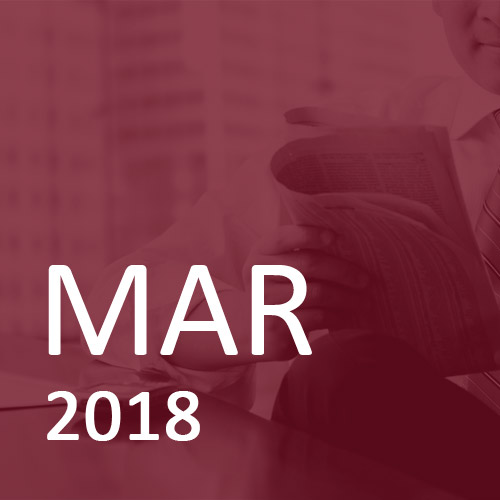 A hardening of attitude amongst central bankers sent a chill through stock-markets, resulting in a big step up in volatility. The UK stock-market lost 5% over the month, having been down nearly 10% in early February. Most other markets fared better in sterling terms, showing losses of 2-4%. UK fixed interest bonds fell by around 1% with corporate bonds falling by more than government bonds.

The new era of gradual monetary tightening faced challenges from several major central banks. The new Chair of the Federal Reserve, Jerome Powell, surprised investors with his straight-talking, using his inaugural speech to express his view that the US economy had strengthened in recent months, and signalled the likelihood of interest rates rising by a further 1% in 2018.

The Bank of England’s Monetary Policy Committee used its quarterly inflation report to warn that if the economy were to evolve in line with their projections then monetary policy would need to be tightened earlier and by a greater extent than previously indicated; this was taken as hinting at a 25-basis point rise in May.

Murmurings of discontent from the European Central Bank were getting louder with some members pushing for an end to the quantitative easing programme this year. The problem remains, though, that whilst growth appears to be strengthening, inflation is slipping further from the ‘2% or just under’ target that the Bank is mandated to uphold. Meanwhile, the Governor of the Bank of Japan spooked markets with comments suggesting a beginning to the end of their bond-buying in April 2019! He later clarified that this would be dependent on inflation reaching the projected 2% target.

Never far from the headlines, President Trump announced plans to impose stiff tariffs on imported steel and aluminium. As always, this isn’t set in stone and may just be part of Trump’s negotiating strategy. The move was universally unpopular, leading to the resignation of his top economic adviser Gary Cohn, and provoked an immediate announcement of retaliatory measures from the European Union.

We view this recent pullback in stock-markets as both desirable and healthy. The increase in volatility has more to do with asset valuations than a deteriorating economy. Global economic growth remains resilient but at risk from political interference. On the one hand President Trump’s tax stimulus risks turbo-charging an already hot economy with the consequent risk of higher inflation leading to higher yields (and therefore lower prices). On the other hand, the President’s desire for a trade war poses a risk of deteriorating global growth which will reduce the corporate earnings already factored into share prices.

One of the interesting points to come out of the recent Bank of England meeting was the change in rhetoric from Governor Carney. His statement that ‘the Bank was no longer willing to tolerate inflation above the 2% target for the next three years’ was a significant departure from his previous emphasis on ‘looking through’ above-target inflation because safe-guarding jobs in the UK was his priority. It still feels unlikely that rates will rise by much, given the ongoing uncertainty over Brexit, but with rate expectations at such low levels even a small adjustment could unsettle investors.

It’s too soon to tell how significant the resignation of Gary Cohn is; President Trump’s top economic adviser, formerly of Goldman Sachs, was highly regarded as a rare voice of reason in the White House. Whilst we have become accustomed to the almost comical departure rate of Trump’s staff, there’s a feeling that this one matters; he was the markets’ man on the inside that would guide the President from doing anything too stupid. The implication of Cohn’s resignation is that Trump is serious about embarking on a trade war and has further measures in mind.

For income-seeking investors, bonds and equities compare favourably with the low return on cash deposits; however, the over-riding question is how well central banks manage their withdrawal of funds from the markets and whether investors require a risk premium to compensate for this lack of support.

We didn’t make any changes during the month, but we have set levels where we think it would be prudent to further reduce risk. Equally, we have set a level that we think represents a decent buying opportunity for the longer term.

Our meeting with Neil Woodford was re-assuring and we will remain patient holders of his income fund.

Most funds fell over the month, but our policy of diversifying risk softened the blow; on the higher-risk portfolios the Neptune Russia fund rose by over 3%, putting it 10% higher over the 3-month period. Meanwhile, across our portfolios property and some of the absolute return and bond funds showed small gains.