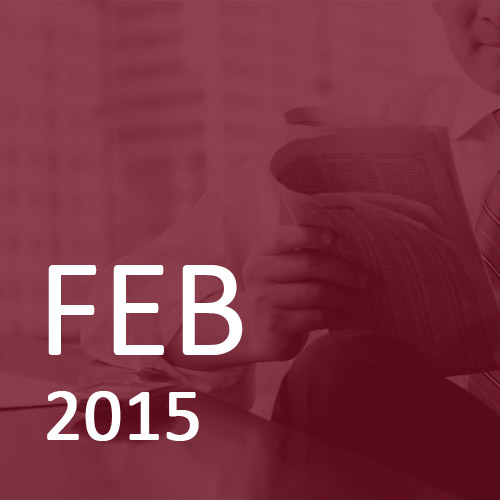 The start of the New Year has been dominated by an escalation in tensions with Russia and a messy stand-off between the new Greek government and the German-led ECB. Year-to-date Russian and European equities are up by 14% and 4% respectively! The UK and Asia have also gained around 4% whilst the US lagged with a fatigued 2% rise.

Despite better than expected employment data from the US the global theme has been one of unease over slowing growth and falling inflation. Both the World Bank and the IMF downgraded their forecasts for global growth in 2015 and the Bank of England warned of a more persistent risk of low inflation in the UK.

The ECB announced its long-awaited bond-buying programme; from March until September 2016 the ECB will buy Euro 60 bn a month of assets, including sovereign bonds, with the option for this to continue until there are signs of a return of inflation. European bonds fell to record low yields and the Euro hit an 11-year low.

Daily headlines have been dominated by the game of Euro-chicken being played out by Greece’s new Syriza-led government and the German-led ECB. The complacent assumption is that there will be a standard Euro-fudge with both sides agreeing to deceive the tax-payers, but there is a chance that both sides prefer the politics of strong leadership resulting in Greece leaving the Union.

It is getting increasingly difficult to earn a positive return on cautious investments like bonds or cash. The bearish take on this is that if so many investors are prepared to accept negative returns in order to keep their money safe then that doesn’t reflect well on equities. However, the gains made in January demonstrate that risk asset classes will remain in demand for those seeking a positive return on their investment.

A third take on this, and one that we favour, is that most assets continue to be driven by the actions of central banks. Whilst we’re pleased that this is benefiting our clients we feel that it would be irresponsible to fully back this move whilst disregarding market fundamentals.

As bond yields have already fallen below all rational forecasts there is no point in calling the bottom. However, there is little reward left for the increasing risk of capital losses. We aren’t keen on fixed interest as a whole, but if pushed we prefer the additional income offered by investment grade corporate bonds.

On the lower-risk funds we sold the Legal & General All Maturities Gilt Index fund and bought the Fidelity MoneyBuilder Income Reduced Duration fund. This switch offers a pick-up in yield combined with less exposure to interest rate risk.

Whilst much of the rhetoric is less enthusiastic market moves continue to be determined by the actions of central banks. Although some of these, such as QE programmes, have been well-signalled others, like the Swiss National Bank removing its currency bands, were a major shock leading to sizeable losses for some investors but not to the detriment of our portfolios! This supports our view of the benefits of running well-diversified portfolios.

The year has already seen an increase in volatility across asset classes, although this has been mostly biased to the upside. We expect a reversal in markets at some point and are keeping a portion of the portfolios in low-risk absolute return funds ready to switch into good long-term investments when opportunities arise.