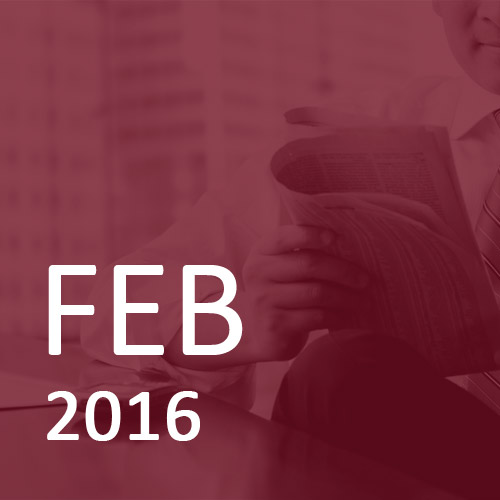 For much of January the oil price continued to lead stock-markets lower with developed markets for once taking the biggest hit. European and Japanese shares fell by around 4% in sterling terms whilst the UK, Asia and the US showed a more restrained 2.5% loss. The pace quickened at the start of February as concerns grew over the ongoing viability of Deutsche Bank; stock-market losses continued although Japan and Asia fared better due to stronger currencies.

The European Central Bank (ECB), closely followed by the Bank of Japan (BoJ), tried to steady markets; the ECB dusted off one of Draghi’s “We’ll do whatever is needed” speeches saying that the downside risks had increased and that the ECB would revisit, and possibly reconsider, their monetary policy in March. The Bank of Japan introduced negative rates, cutting to -0.1%- one week after saying that there were no plans for negative rates!

David Cameron took time out to impersonate Neville Chamberlain, returning from Europe waving a piece of paper and saying that he’d secured a great victory for the UK. More constructively the Bank of England’s Monetary Policy Committee left interest rates unchanged for the 82nd consecutive month whilst cutting their economic growth and inflation forecasts. Sterling fell to a 5-year low as money markets priced in no rise in interest rates until August 2018.

Those enjoying an early start to Christmas will have missed the ‘Halley’s Comet’ that was a rise in US interest rates, and you might have to wait a while for the next one. Ambiguous manufacturing data, some of which portended a contraction in growth, caused the dollar to weaken and US government bonds to rally on the expectation of fewer, if any, interest rate rises this year. This week Federal Reserve Governor Yellen acknowledged that there were risks that could knock US growth off course but added that she didn’t see a situation soon where it would be necessary to cut rates.

Few of the underlying concerns are new; it’s just that we’re suddenly listening to the little boy pointing out that there are several emperors not wearing any clothes. We’ve spent a good couple of years worrying about slowing growth in China, even if we don’t believe their data, and the fact that overall debt is far higher than before the last great crisis. Yes, falling oil and commodity prices will hit some firms badly, fatally in some cases, but they’re a big bonus to many other parts of the global economy.

The size of Deutsche Bank’s derivative book is massive (think of a big number and you’d still be several 0’s missing) but it’s not been a secret, and the current banking worries are more about the difficulty of raising earnings in a negative interest rate environment than one of solvency, although there are concerns that new ‘Bail-in’ laws in Europe might result in losses on some bond holdings.

The transference of worry from oil and China to the global banking sector suggests some combination of everyone sitting in the pub with a half-empty glass and too many speculative owners of equities who are using any rally to cash in their chips.

There was a time when a well-timed wink by a central banker was sufficient to drive shares higher. However, recent announcements by the European and Japanese central banks resulted in no more than short-term rallies across asset classes, which took only a matter of days to reverse. This appears symptomatic of the increasing distrust of central bank policies and the desire for a fresh approach to boost general levels of confidence.

We expect market volatility to persist and are therefore continuing to run robust portfolios that aim for performance over the longer term but with lower than average price movements during uncertain times.

Typically, in times of financial stress investors turn to fixed interest investments. However, this time around government bonds offer little value whilst bonds issued by banks and corporations have fallen in price. We remain underweight bonds and where we do hold them, on our cautious and income portfolios, we hold a blend of strategic, global, government and investment grade corporate bonds.

During a torrid month our stabilizers came in to play with our gold holding rising by 25% year-to-date and property offering further small but consistent gains.

There’s a popular maxim about buying when others are fearful, but there’s an opposing quote about catching falling knives. Whilst it’s tempting to look for value our primary concern is to preserve capital until the picture is clearer. We prefer to concentrate on the quality defensive funds that we currently hold until we feel that markets offer excellent long-term value.