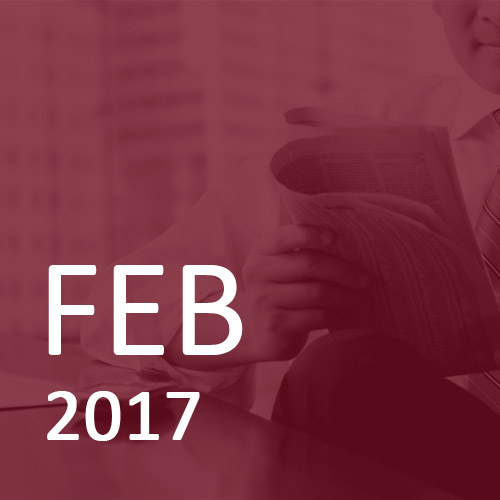 Trump euphoria peaked around the middle of the month with leading stock-market indices in the UK and US making new highs. Initially investors took heart at the pace and determination of the President to enact his campaign promises, but the feeling grew that perhaps current valuations were discounting too much good news.

In sterling terms, most major stock-markets ended the month flat, though there were gains in Japan (+1.8%) and Asia (+4%). Government bonds fell by around 2% though the positive economic back-drop produced small gains for high-yield bonds.

Little excitement came from the monthly round of central bank meetings, the exception being the Bank of England raising its growth forecast for 2017 to 2%. There was no change to the inflation forecast although it transpired that some members were getting twitchy about the possible follow through of factory input prices, now rising at an annual rate of over 15%.

As Theresa May moved closer to triggering Article 50, now with parliament’s approval, Governor of the Bank of England, Mark Carney, told the Treasury Select Committee that Brexit was no longer the biggest risk to UK financial stability. Meanwhile, government bond yields of peripheral European countries, and France, rose on political concerns.

We’ve entered an era where politics matter more to markets than central bankers. Witness the fall in the US dollar, and consequent rise in the Euro, as Trump came close to accusing Germany of manipulating its currency. Individual share prices have ‘flash-crashed’ on negative Twitter comments by the US president and sterling, along with UK companies exposed to overseas markets, rose and fell on the latest Brexit-related headlines.

Whilst President Trump has been more active than a rabbit in the spring many of his early edicts have been picking fights rather than stimulating growth. We will feel more comfortable if he replaces the protectionist rhetoric with firm plans for a fiscal stimulus.

We remain concerned that whilst global economic growth might be improving a lot of good news has already been priced into investment markets. There are too many uncertainties over Brexit negotiations, European politics, trade wars and the daily Twitter messages of the US President to feel confident in any long-term projections.

The European Central Bank is mandated to target inflation at ‘below, or close to, 2%’. With EU inflation currently running at 1.8%, the debate over the need to change monetary policy is likely to heat up, especially from the German end. If the traditional ECB stubbornness sees no change in policy, then bond vigilantes might take it on themselves to send yields higher on bonds with longer maturities.

Meanwhile, back in the UK even the Governor of the Bank of England had to begrudgingly acknowledge that things were far better than his pre-referendum scare-mongering. However, this change of view is unlikely to be reflected in a rise in interest rates anytime soon. The Bank’s view is that they run a fine line between keeping inflation in check and killing off a fragile recovery, and the current inclination is to ‘look through’ short-term inflation (i.e. leave rates alone). The question is, though, whether imported price rises feed through to shops and services; if they don’t then that will represent a squeeze on corporate margins (and profits), if they do then that will squeeze a consumer sector already funding spending from savings/ borrowings. Either way, it doesn’t paint too bright a picture!

The recent rally gave us the opportunity to take a bit of risk off the table on our cautious-balanced  portfolios, switching small amounts of the UK, US and Japan into a money fund.

Our target was reached to slightly reduce our large under-weight position in bonds on our most cautious portfolios; we re-invested in the Legal & General All Stocks Gilt Fund. We still prefer equities to bonds over the longer term, but feel that in the near term there’s a risk that markets have over-shot and that a correction in equities could send bond yields lower.