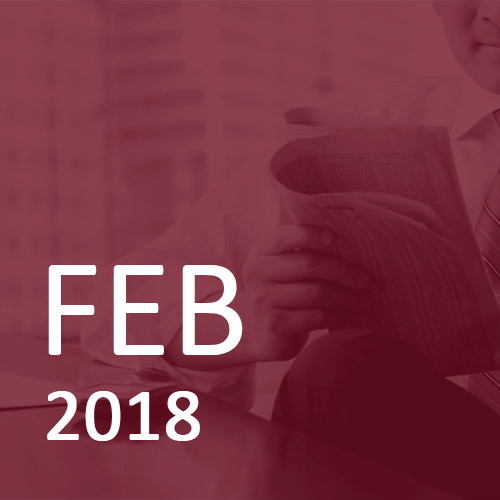 January witnessed a euphoric start to the year, with economic data around the world surpassing expectations, sending many stock-markets into historically extreme overbought positions. In local currency terms Asian and Emerging market indices rose by over 6%, with the US close behind at plus 5%, but a strong month for sterling reduced these gains to 3.5% for emerging markets with Asia, Europe and the US broadly flat. Shares in the UK fell by around 2%; government bonds fell by a similar amount although corporate bonds showed little change on the month.

Upbeat comments from the US Federal Reserve Bank and members of the European Central Bank (ECB) unnerved bond investors; speculation that the US might squeeze in an additional interest rate rise, and that the ECB would end its bond purchases sooner than planned, saw yields on 10-year government bonds rising by nearly 0.5% (consequently bond prices fell).

Initially, this move had a limited effect on share prices, but a succession of stronger than expected US data, culminating in an unexpectedly large rise in US wages, high-lighted possible inflation risks, leading to a marked downturn in markets.

The main US S&P 500 index celebrated a record 15th straight monthly rise and the longest period without a 5% correction; unfortunately, the after-party, leading into February, heralded a swift collapse in prices, surpassing 5% and briefly touching 10% during last Tuesday’s manic trading day.

At the time of writing, markets are rallying hard, keen to prove that Monday’s shock-fall in the United States was an idiosyncratic event and that, on the whole, there’s nothing to worry about. This sell-off wasn’t a reflection of a deteriorating economic situation; if anything, the catalyst was the recognition that stronger than expected growth could lead to higher inflation and accelerate central bank monetary tightening. The turbo-charge was produced by some complicated Exchange Traded Funds, ironically designed to reduce risk, going very, very wrong!

Last month we warned about an ‘undignified rush for the door’ on negative news; this week we had one isolated example of that when the demand to close positions in a couple of Exchange Traded Funds was far greater than the liquidity available, forcing extreme price moves.

What we, and other investors, won’t know for some time is whether that was the correction, done and dusted, or whether that was a foretaste of what’s to come. Although a specific event triggered last Monday’s 4% fall in American shares, we now return to a world where strong growth will keep the pressure on central banks to curtail their bond purchases and edge interest rates higher. Closer to home, the polarity of parties (both Leave/ Remain and UK/EU) makes any Brexit outcome look implausible, causing a prolonged period of uncertainty both in business and investment markets.

On the other hand, whilst holding cash is the safest form of capital preservation, returns remain low and fall some way below current levels of inflation. Investors will continue to seek returns above inflation by investing in other assets, but this year could see a return to more normalised markets that fall as well as rise.

Our holding in the Woodford Equity Income fund detracted from performance; Neil Woodford has an excellent long-term track record but has suffered from several bad calls over the past year. We have a meeting scheduled with him to discuss the fund in more depth.

Our bio-technology and Russian funds continued to perform well but the gold fund gave back some of last month’s gains.

We’re continuing to run diversified portfolios, with lower exposure to bonds, and with the capacity to take advantage of opportunities when they become available. For now, we’re maintaining our existing positions while we wait for the markets to settle down.