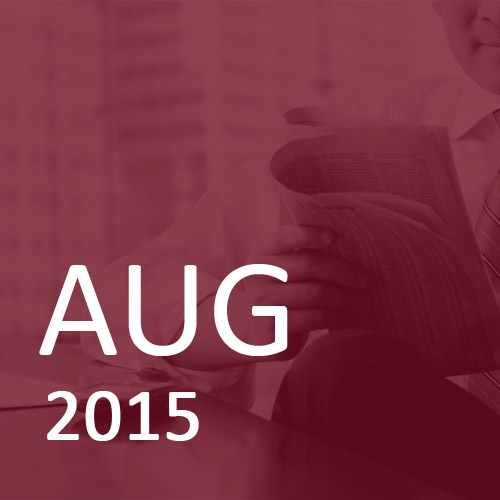 Stockmarkets rallied on relief that the Greek problem had been kicked sometime into the future with a third bailout. Europe led the way with gains of nearly 4%, followed by the US and UK with rises of 2.7%; fixed interest bonds rose by between 1-2%. Asia and emerging markets fared less well, falling by 1-4% as the Chinese market imploded.

An agreement of sorts was reached between Greece and Germany (aka the European Union). Other than the desired humiliation of Mr Tsipras’ Greece and the fact that technically Greek bonds still have a value there was little to shout about. The conditions imposed were harsher than previously voted down by the Greek public and it’s hard to see how their fortunes can improve unless there is a debt-forgiveness plan-something that the IMF and ECB favour but Germany remains strongly opposed to.

As the Greek door closed so the Chinese door opened, with possibly far greater ramifications for stock-markets. The official response to further selling of Chinese shares differed to the mainstream action of monetary stimulus; selling by larger holders was banned for 6 months, large companies were ‘encouraged’ to buy their shares and all companies were allowed to suspend their shares at will. Whilst this caused a temporary rally this set-back to introducing China to free market forces un-nerved investors already concerned at the slowdown in the economy. The danger here is not just to China but to other Asian markets and commodity-related economies like Australia and Canada.

The US economy bounced back to life growing at an annualised rate of 2.3% in the second quarter, following an upward revision to the previously negative first quarter. In their latest meeting members of the US Federal Reserve left open the option of hiking rates at their next meeting in September but offered no firm steer to markets. Governor of the Bank of England, Mark Carney, gave a strong indication that UK rates would rise ‘around the turn of the year’ but tempered this by indicating that rates would top out at around 2.25%. In stark contrast there were further rate cuts in Russia, Canada and New Zealand.

The summer holiday period is notoriously illiquid across stock-markets, more so than usual! This can result in more volatility but without necessarily a change in overall direction. We view this time as possibly presenting entry opportunities. We put some money back into the market last month during the Greece-related weakness and have set tough targets for where we would be happy to put more money into the market.

Stripping out the short-term swings, many developed stockmarkets aren’t too far from their highs. With good news already in the price this makes markets more vulnerable when-ever the earnings these valuations imply are put in doubt, whether through weaker economic data, higher interest rates or geo-political uncertainty.

Asian and emerging markets arguably offer more value, certainly relative to developed markets. They have suffered for some time now on the expected fall-out from rising US interest rates and more recently from the sharp correction in Chinese equities. We think that it’s likely that there’ll be an automatic mark-down when US rates do rise, but feel that the market has had plenty of time to adjust to this and that there could be buyers waiting for this opportunity to re-enter the market.

We still like the less volatile protection offered by absolute return funds; these add some stability to the portfolios and their more consistent value offers a sound platform from which to take the plunge into cheapening equities.

We remain underweight in Europe but have set levels that we feel would represent some value and where we’d be prepared to invest further.

In general we currently prefer funds that offer a value style of investing to those focussing on growth. We feel that these will provide a better return with less risk to your capital over the medium term.