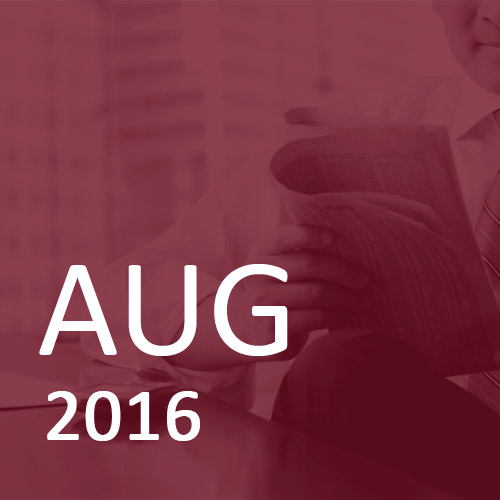 Stock-markets continued to push higher led by emerging markets and Asia, which saw gains of 8-12%. In the UK the hunt for income saw small and mid-cap funds return to favour, out-performing FTSE 100 stocks by around 4-5%.

Star performance came from Bank of England Governor, Mark Carney. He emulated Mario Draghi’s “Whatever it takes” moment, saying that he was prepared to take any necessary steps to support the economy and promote confidence. His first steps were to combine a 0.25% interest rate cut with an increase in asset-purchases (QE) and additional lending facilities for banks. This helped push UK government yields to record lows; the government can now borrow money for 10-years at a rate of just 0.5%!!

In sharp contrast, the Bank of Japan’s failure to deliver further significant quantitative easing or interest rate cuts saw their government bond yields rise by 27 basis points, returning to a zero yield. This represented a significant capital loss, a risk that all bond investors should be wary of with yields at such low levels.

With no discernible pattern to global economic growth there were some encouraging signs in the United States and across parts of Europe, though not enough for central banks to offer a clear view of their intentions.

Stock-markets post-EU referendum provided further proof that getting an economic or political call right is very different to correctly predicting the market. Those who claim to have expected a Brexit vote would have backed a fall in sterling but would have been unlikely to foresee a 10%-plus rally in equities. Many ‘experts’ even predicted a rise in UK bond yields as we would be seen as a poorer credit risk. In the event the FTSE rallied to within 2.5% of its all-time high and bond yields hit record lows.

We didn’t predict this rally, and feel that few of the global concerns have diminished, but we can understand certain forces that would have driven this move. Immediate re-assurances of support from central banks helped calm the nerves along with the realisation that, despite the vote, little would change immediately. One rational concern is that investment in future projects might be shelved, though there has been evidence of businesses keen to adapt and look for new opportunities.

A further factor that we need to remain cognisant of is the need for income. High-quality fixed interest bonds have joined savings accounts in offering no worthwhile income for savers; in this Alice in Wonderland world that leaves savers looking to equities, or poor-quality bonds, for income and these savers will be less discerning about earnings multiples or credit quality. Yes, it’s all slightly mad but then it has been since central banks decided to run the markets.

For now, there’s almost an air of summer complacency while traders take holidays or enjoy the Olympic spectacle. But as the summer holidays draw to a close attention will focus on post-referendum data in the UK and the possibility of Donald Trump running America; more volatile markets lay ahead.

We made no further changes to our portfolios over the month. The rally across equity markets has been stronger than we expected but we expect volatility to pick-up going into the autumn.

The temporary suspension of dealing in commercial property funds remains in place, but given the exuberance across other asset classes we regard property, along with gold, as a useful diversification of risk.

Our overseas holdings continued to benefit from the currency translation of weaker sterling, more so following August’s cut in interest rates.

Gold has continued to trade higher and remains a useful hedge against the perceived failure of central bank policies and the general uncertainty ahead.