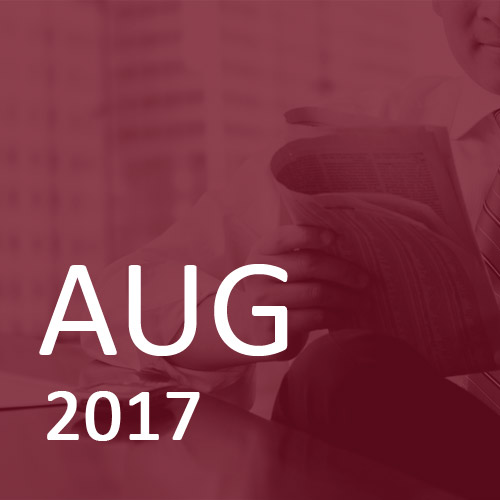 Another month of political farce in the US and UK, antagonistic posturing from North Korea and mixed economic data did little to deter demand for equities with the world equity index making a record high; fixed interest bonds were also mildly positive after dovish comments from central bankers.

Currency moves had a major impact on returns over the month; for example, in local terms US shares hit new highs, rising 2-3% whilst European shares fell by 0.5-1.5%, but when translated into sterling European shares showed gains of around 1.5% whilst US shares barely rose. UK stock-markets ended the month 1% higher with small and medium-sized companies out-performing larger ones. Emerging markets improved by over 4%.

Inflation across the main economies under-shot forecasts, retreating from the recent highs that had provoked calls for monetary tightening. In the UK prices fell month on month for the first time since April 2016, though this was seen as a temporary blip.

Further evidence emerged of the squeeze on UK consumers; the HIS Household Finance Index indicated the lowest appetite for major purchases since 2013, and a survey of the UK’s biggest banks and building societies reported credit card default rates rising at the fastest rate since 2009.

Europe continued to offer the most consistent signs of growth but the strength of the euro, hitting a 3-year high against the dollar, provoked concerns about its effect on the competitiveness of European exports; this sent European stock-markets lower, particularly in Germany.

The ‘Trump Trade’ died a death several months ago when it became clear that he would struggle to implement many (any?) of his election promises. The interesting bit though, is that despite this, and the Federal Reserve raising interest rates, US shares have repeatedly hit new highs. Indices even closed at a fresh high after the Federal Reserve signalled that they were close to reducing their bond portfolio (acquired via quantitative easing). By contrast the US dollar bore the brunt, falling to its lowest in 31 months.

Both moves can, in part, be explained by the slightly more dovish rhetoric from the US Federal Reserve. Yes, they’re still raising rates but the feeling is that there will be fewer rises, with the peak considerably lower than previously feared. Following Fed Chair Yellen’s more cautious testimony earlier in the month the market priced the likelihood of a third rise this year at less than 50%.

Investors’ need for income continues to be reflected through the bond markets. Firstly, despite the heaviest hints yet that the US Federal Reserve could start to reduce its balance sheet in September, 10-year US treasuries yield just 2.25%; in the aftermath of the ill-feted Taper Tantrum of 2013 yields hit 3%!

Secondly, hot on the heels of the over-subscribed new bond issue by serial defaulter Argentina, investors clamoured for the first issue in three years by Greece. Historically this type of folly has signalled the top of the market, but with little chance of higher cash rates in Europe or the UK this year the search for higher yields will probably continue.

Our income portfolios switched from the Newton Asian Income fund into the Guinness Asian Equity Income fund. We also added a small weighting to commodities through the Blackrock Gold & General fund.

As uncertainty over wider geopolitical and economic issues continues we anticipate an interesting and possibly volatile autumn. We’re maintaining diversified portfolios with the capacity to take advantage of opportunities when they become available.