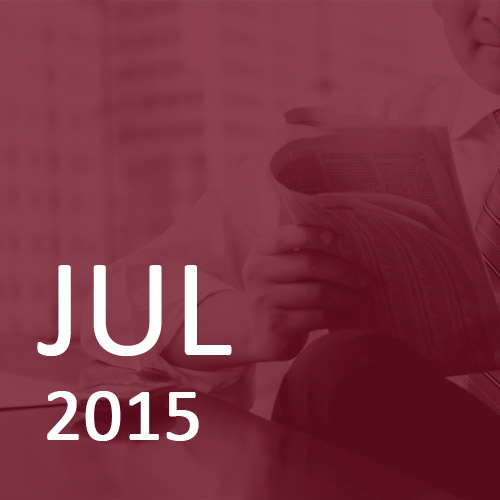 Markets lost momentum and drifted lower to varying degrees. During the period the US Nasdaq index closed at a record high and Japanese shares recorded their best level for 18 ½ years but both finished the month in negative territory. Fixed interest bonds fell by between 1 and 3%, the FTSE 100 lost over 6% and emerging markets fell by a bit more than that.

Markets continue to be dominated by speculation on whether Greece will remain in the European Union and the repercussions if it’s forced to go it alone. Greece became the first ‘developed’ nation to default on a repayment to the International Monetary Fund; this triggered a temporary closure of the Greek banks and a referendum where Greeks voted not to accept austerity measures imposed as part of bailout conditions.

While Greece is grabbing the easy headlines China is quietly imploding. Chinese shares had been the year’s star performers, driven by retail investors gambling with borrowed money. Recently, despite government intervention, this market has collapsed, dragging large parts of Asia with it.

Yields on government bonds fell as they returned to ‘safe-haven’ status; the obvious exceptions were bonds issued by Greece and its peripheral troubled partners, Spain, Portugal and Italy. The dichotomy in global interest rates remained; the month saw Russia, China, South Korea, Sweden and New Zealand cut interest rates but speculation remains over the first hike in US rates. The US Federal Reserve signalled a possible rise as early (late?) as September but at the same time lowered its projected path of future rises, cutting its growth forecasts in the process.

Data in the UK was positive with upward revisions to last year’s GDP numbers, a flicker of inflation and further improvement in the employment numbers. One member of the Monetary Policy Committee said that he might consider voting for an interest rate rise in August. We guess that he’ll be pretty lonely!

In a marked change the recent weakness in European equities has been accompanied by a weaker Euro. Although not big fans of Europe we view this as approaching a more realistic buying level across the portfolios.

We still prefer the value offered by UK equities and smaller companies in particular. This sector lagged the larger companies ahead of an uncertain UK election but is now coming back into form.

We anticipate further bouts of nervous selling over the coming months as the Greek shambles continues to play out and the prospect of a US rate rise moves closer. The plan is to use these moves as an opportunity to increase market exposure but these windows might be brief and tricky to trade within.

This nervousness, together with the European Central Bank’s ongoing bond-purchasing programme, could push bond yields lower again. However, we don’t feel that this is a trade worth pursuing and would prefer to sell more bonds at the tighter levels.

We took advantage of market weakness to edge a bit of money back into equities. On the higher-risk funds we dipped a toe back into Europe and on the remaining funds we increased exposure to UK smaller companies.

We recently met the managers of the Unicorn UK Smaller Companies fund and liked their style and process. We’ve been monitoring the fund with a view to investing for a while and the shock resignation of the fund manager for the Standard Life UK Equity Unconstrained fund presented the catalyst for the switch. The Standard Life UK Equity Unconstrained fund has served us well but for now we prefer to watch that fund and the previous manager’s new move from the side-lines.

Our over-weight property position proved its worth as a diversifier, providing a positive return on the month when few gains were on offer across markets.