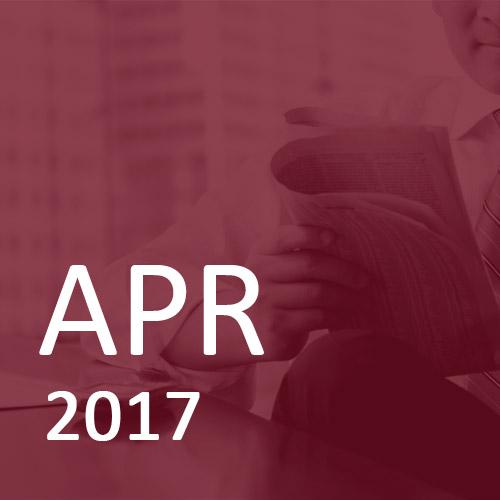 An encouraging start to the month saw several stock-markets reach new highs before taking a breather as investors began to question the durability of the reflation trade. The US Federal Reserve’s expected 0.25% interest rate hike was well received, but President Trump’s failure to steer his Healthcare Bill through Congress led many to doubt whether his infrastructure spending and tax reforms would progress as promised.

Asian and European stock-markets were the star performers, rising 2-4%; the UK gained around 1% and the US and Japan were mildly negative, all in sterling terms. Fixed interest bonds took the US rate hike in their stride and rallied further, encouraged by the US Federal Reserve’s reluctance to signal a faster pace of rate rises; UK 10-year Index-Linked bond yields hit a record low of -2.18%-yes, that is a minus sign!

Central bankers were frequently in the news; the US Federal Reserve spoke of reducing the size of its balance sheet (reversing Quantitative Easing) before the year-end, which contrasted with the European Central Bank (ECB) playing down speculation that they would respond to stronger growth by raising interest rates (reducing negative interest rates!). This month the ECB will begin reducing the amount of monthly asset purchases from Euro80 to Euro60 billion, but we’re not allowed to call it tapering. The term ‘Forward Guidance’ took on a new meaning when US Fed’ member Jeffrey Lacker resigned after it emerged that he had divulged information to a journalist ahead of the official release.

The trend towards stronger global economic growth continued, though in many cases the improving ‘soft data’ (surveys) were at odds with the ‘hard data’ (reported activity). For example, the Global Manufacturing Purchasing Managers Index hit a 69-month high, but much of the reported manufacturing showed slower growth during the month. In the United States, employment data and some confidence numbers remained strong but car sales continued to decline and defaults on auto-loans rose.

Although the growth picture looks encouraging, one fairly large elephant in the room is the level of global debt which, according to the Institute of International Finance, pushed to a fresh high of £170 trillion. And the trouble is that a lot of this debt isn’t productive; for example, US companies have been leveraging up to buy back their own shares or pay ever larger dividends, rather than investing in the business.

In the UK, the savings ratio fell to 3.3%, the lowest since records began in 1963. This figure reflects not just the level of savings but also the level of borrowings; the concern here is that this has been largely responsible for growth in the economy, but will likely decline in the event of rising interest rates and/ or a fall in real disposable income due to wage rises not keeping pace with inflation.

In the US, Congress will have only 5 days when they return from their Easter break to pass a spending bill allowing an extension of the debt ceiling. Failure to do so could ultimately lead to a shutdown in government spending. The reality is unlikely to be this extreme but it could have broader implications regarding the Trump administration’s ability to implement some of his key policy initiatives like tax reform and healthcare. These policies have helped to stoke the post-election rally and share prices could be quick to reflect any disappointment.

Two potentially market-moving events are French elections in April and May, where there’s currently little expectation of a Le Pen victory, and the US earnings season where some light will be shed on the health of the economy.

We still prefer equities to bonds over the longer term, but feel that in the near term there’s a risk that markets have over-shot and that a correction in equities could send bond yields lower. In addition to bonds and equities, we’re continuing to hold a blend of property, absolute return and gold funds to diversify risk.

A greater uncertainty over wider geopolitical issues and a global mountain of debt, mean that we anticipate an interesting and possibly volatile period ahead. Previous events have highlighted the benefits of holding a robust, diversified portfolio over the costs of taking bets on major outcomes. We’re maintaining diversified portfolios with the capacity to take advantage of opportunities when they become available.