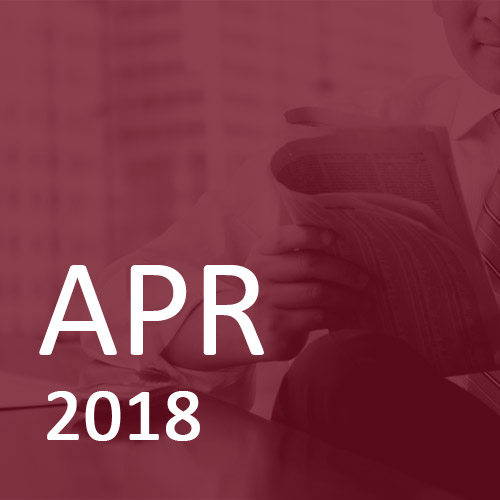 Another volatile month saw a further leg-down in global stock-markets; US indices fell into correction territory (a 10% fall from the peak) as technology stocks suffered a backlash, and the prospect of a trade war between the US and China, spooked markets. In sterling terms, US shares ended the month 4% lower with European, Asian and Japanese indices faring only slightly better. UK stock-markets fell by around 2% and fixed interest bonds had a mixed month with government bonds gaining up to 2% whilst corporate debt ended around 1% lower.

A scandal involving Facebook’s use of personal data, Uber’s first fatal crash with a self-driving car and President Trump’s Twitter war with Amazon created a blizzard of bad publicity for the technology sector, which had previously been the driving force behind the meteoric rise in US stock-markets.

North Korea proposed summits with South Korea and the United States, with the possibility of talks on denuclearisation, but there was little respite on the geo-political front. Newly re-elected President Putin’s spat with the UK escalated into widespread tit-for-tat expulsions and the United States announcing further sanctions aimed at rich associates of Putin. Simmering tensions over trade tariffs boiled over as the United States and China upped the ante. However, we should appreciate that this isn’t yet a trade war, merely a lot of hot air and posturing ahead of serious negotiations; note Trump’s retraction of most of his previously announced metals tariffs.

The US Federal Reserve raised interest rates and indicated that their current thinking included an additional rate hike in 2019. Both the Federal Reserve and the European Central Bank increased their 2018 forecasts for domestic growth, the latter also removed its explicit commitment to buy more bonds and expand its quantitative easing programme if necessary. In the UK the Bank of England voted to hold rates at the current level, as expected; however, two committee members favoured raising rates immediately which took investors by surprise.

Recent share price falls have been attributed to several factors: a rise in geo-political tensions, the prospect of a Sino-US trade war, and signs that economic growth may have peaked. But there is an alternative explanation for the recent market declines, which is that in an environment of diminishing global liquidity, the valuation levels in markets are increasingly being called into question.

There is no doubt that monetary stimulus is being withdrawn and, in some cases, monetary tightening has begun. The US Federal Reserve and the Bank of England are on an established path of gradually raising interest rates. In the United States the bond-buying programme is being reversed (Quantitative Tightening) and although in Europe monetary stimulus continues at a reduced rate, there looks to be little justification for this to continue into next year.

The withdrawal of monetary stimulus has coincided with a marked increase in volatility. For years now, there has been a complacent view that any sell-off in shares or bonds would be countered by central bank buying (effectively creating a legitimate false market); the rationale that ‘the worse the news, the greater the likely central bank stimulus’ encouraged a ‘buy the dips’ mentality. The gradual withdrawal of this support gives investors more confidence in expressing a view on asset prices in either direction.

February, and parts of March, witnessed indiscriminate selling, mostly of more liquid investments, across markets. But, once the initial panic subsided, investors began to differentiate between over-valued investments and those that had previously been left behind or were more suitable to the new environment. We have seen signs of this with technology stocks being switched into more defensive utility shares.

The global economy and investment markets have moved on to the next stage. This isn’t necessarily negative; the parabolic rise in asset prices looks to be over, for now at least, but it’s too early to see whether the increase in volatility will drag markets lower or just produce more frequent price swings creating opportunities for buyers and sellers within a range.

There were few hiding places last month with most asset classes showing losses, but our policy of diversifying risk softened the blow; across our portfolios property and some of the absolute return and bond funds showed small gains.

We have set targets where we think it would be prudent to further reduce risk. Equally, we have set a level that we think represents a decent buying opportunity for the longer term. Despite the increased volatility, none of our dealing targets were reached during the month.