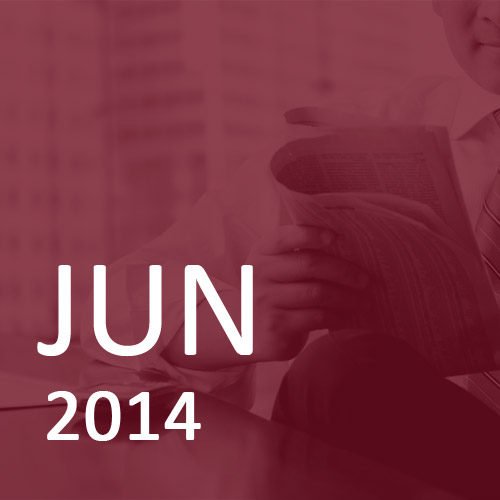 May was a positive month across asset classes, ranging from 1% on UK fixed interest bonds to nearly 5% on Japan equities. A more extreme performance came from a 12% rise in the Russian market as tensions with the West eased.

In the UK the FTSE 100 index hit a post-credit crunch high, falling just short of the 6900 figure. Although it failed to hold the high the index spent the month in a higher 6800-6900 range, which could be interpreted as a bullish consolidation.

The Bank of England used its Quarterly Inflation Report to emphasise that although they were encouraged by improvements in the British economy they were in no rush to raise interest rates and that when they did the ceiling was likely to be lower than on previous occasions.

Bond yields continued to fall, driven by a fear of deflation in Europe and by US pension funds taking profits on equities and switching into long-dated bonds.

The Office for National Statistics often struggles in the credibility stakes, but the latest task set by the EU looks a touch unfair. In a desperate attempt to boost reported growth across Europe member states now have to include income received from prostitution and the illegal sale of drugs!

We view the UK as a slightly saner refuge in an insane world. The US market is making regular new highs in the face of some worrying data (negative GDP for Q1 2014) and the continued withdrawal of monetary stimulus (QE). Meanwhile the German DAX made a new high because European data is so dire that the ECB is now introducing negative deposit rates.

By contrast the UK economy continues to improve with independent growth forecasts being revised higher and unemployment and inflation falling. Chancellor George Osborne will do his utmost to ensure a period of strong growth ahead of the 2015 general election.

Our view on the FTSE 100 is that although the trend is rising the greater risk lies in a more meaningful correction. We would look to use this opportunity to buy shares at the lower levels.

We remain cautious on valuation levels in the US, but this is the market hitting repeated new highs so we will continue to remain invested for now.

Bond yields in our view still remain too low to compensate for the risk of capital loss. The demand for high-yield bonds continues and this has led to a weakening of security offered on some new issues. For now this remains the most popular bond sector but we are turning increasingly cautious.

On our lower-risk portfolios we continue to prefer a blend of equity income, property and absolute return funds to fixed interest assets.

In equities, we generally prefer the defensive qualities of income funds to growth funds.

We continue to prefer the value in emerging markets to developed markets, although we recognise that this differential has tightened over the past few months.

Gold funds had a poor month, falling by around 4%, but we still believe that gold has bottomed and is a sensible long-term hold.