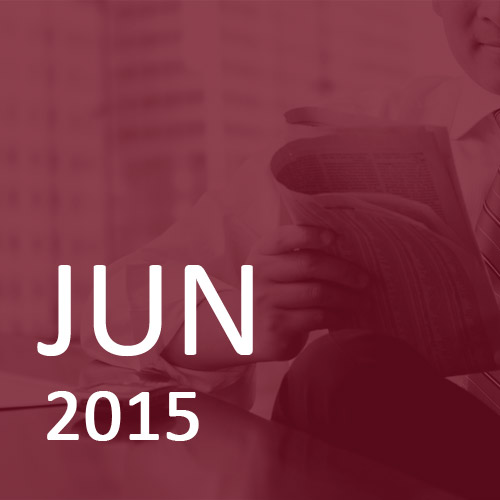 The main stockmarkets range-traded over the month, with direction determined by the latest leaked, or denied, rescue package for Greece. Emerging markets generally trended lower as fears of a US rate rise drew nearer; the exception was China where ongoing retail demand (gambling) pushed the market to a 7-year high.

In the UK a majority win for the Conservatives gave stockmarkets a boost with relief buying in banks and utilities. In the US the S&P 500 closed at a record high, perversely following comments that members of the Federal Reserve had doubts about the strength of the US recovery; this was supported by a revised GDP reading of -0.7% on an annualised basis for the first quarter. By the beginning of June the International Monetary Fund (IMF) was sufficiently concerned to ‘advise’ the Federal Reserve to put off raising rates until next year.

In a break from convention fixed interest was the most exciting asset class, though the main action came during the first week in June. A positive inflation reading for the EU (+0.3%), and Germany in particular (+0.7%), unsettled investors holding bunds on close to zero yields. As the fall in bond prices went global ECB President Mario Draghi lit the touch-paper in commenting that investors should learn to live with bond volatility. The implication that European QE would be restricted to targeting inflation and not bailing out investors saw the 10-year Bund, which yielded 0.06% last month, briefly hit 1.0% before settling back at around 0.85%. With little liquidity other markets saw similar sharp falls in price, causing yields to rise.

The Greek saga of ‘Can’t pay, won’t pay’ continued and it was agreed to allow Greece to defer its default by combining all its debts due to the IMF in June to one payment on the last day of the month.

Europe and Japan are pretty much zero-sum games at the moment. A weakening currency drives markets higher, and vice-versa, but when translated back into Sterling show little overall change.

However, whereas we consider Europe will remain vulnerable whilst the Greek farce persists we feel that Japanese equities offer reasonable value. At a time of record stockmarket highs the main Japanese indices are still 50% below their 1989 highs!

Yields on fixed interest bonds will rise further, but may settle down at between 2.5-3%. In the near term it would be reasonable to expect some buying after the recent sharp sell-off but for us this would be a move suitable only for short-term traders and our view remains that there is little reward for the risks to capital loss.

Emerging markets and Asia have suffered recently as investors expect an adverse reaction when the US starts to raise interest rates. We agree that there are risks but still regard this area as representing better long-term value than most developed markets.

There have been few changes across the portfolios this year as we remain happy with our existing fund selection. That’s not to say that we’re complacent and we are regularly researching suitable alternative funds for different market scenarios.

Recently there’s been some concern over ‘bond proxies’; these are large defensive equities that offer higher income yields than bonds. There are some fears that a rise in bond yields will cause these yields to rise as well, resulting in a fall in prices. However, whilst we agree that prices could fall along with the general market we think that the yield on offer will attract new income-hungry investors. For example, BAE Systems (the old British Aerospace) offers a dividend yield of around 4.14%; this compares favourably to the 3.65% yield offered on its 10-year dollar bond, and with the added prospect of growth in the dividend and share price.

We are continuing to run a reduced level of risk as we think there will be better buying opportunities over the next few months.