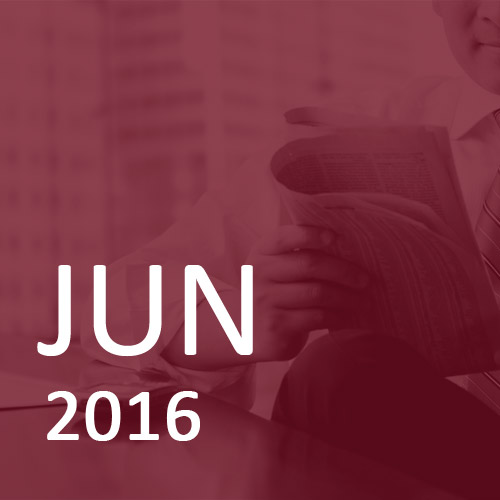 The only certainty has been the ongoing uncertainty pervading markets; the two prime culprits being the likely result of the UK Referendum and whether or not the US Federal Reserve opt to raise interest rates. Both have witnessed near 180 degree swings over the past month, resulting in similar moves in the US dollar, gold and, to a lesser extent, sterling.

Economic data was at best inconclusive with uncertainties in the US and UK blamed for a slowdown in investment and hiring intentions. The Bank of England cut its forecast for growth in the UK to 2% for the year and, in a speech that struggled with impartiality, warned that ‘Brexit’ was the biggest risk to the economy. Governor Carney said that the Bank might be faced with the dilemma of whether to cut interest rates to stimulate growth or raise rates to protect the currency and counter inflation.

Minutes from the US Federal Reserve’s latest meeting all but pencilled in a rate rise in June, though many felt that they would be more likely to defer this until after the UK Referendum. However, subsequent economic data, including the bellwether monthly jobs report, showed further signs of subdued growth to the extent that any summer rate rise now looks questionable.

The net result of this, swinging Brexit polls and further downward revisions on growth by the European Central Bank (ECB) and the Organisation for Economic Co-operation & Development (OECD), was to send government bond yields to record lows and leave developed stock-markets fractionally better with the US leading the way.

June promises to be an interesting month; it will see the meetings of the US and Japanese central banks, followed closely by the UK referendum and Spanish elections. Further out, risks include the ongoing impact of China’s economic slowdown, a renewed decline in commodity prices, political instability in the Middle East and Europe and the possibility of a return of a Greek financing crisis. All, or any, of these will be capable of increasing volatility across financial markets.

Early June has witnessed bond yields setting record lows; Germany is very close to paying nothing in order to borrow for ten years. This is a pretty bold statement when, as a market, we prove incapable of forecasting even one year forward! Equity markets are rallying, with the US S&P 500 closing in on its all-time high. None of this is driven by an improvement in economies but because of the perception that growth is subdued enough to warrant lower interest rates for longer. We feel that there’s a fair chance that these trends reverse the next time stronger data puts a US rate hike back in play.

The tricky bit is that in the background there are two fundamental concerns; firstly, that there is too much debt around the world and secondly that few, if any, assets look compelling when valued on current earnings. For now, markets are being driven by the vagaries of central bank policies; the key will be in judging when focus returns to fundamentals.

With major binary-outcome events approaching, and less market liquidity across the summer months, we’re maintaining our more defensive position whilst being on the look-out for opportunities presented by volatile over-reactions.

On our lower-risk portfolios we are holding a spread of fixed interest bonds, including corporates, index-linked and bonds with coupons that adjust higher if interest rates rise. On our balanced and higher-risk portfolios we continue to prefer the potential returns from property, absolute return and equity income funds.

Gold remains a useful hedge against the perceived failure of central bank policies and the general levels of uncertainty.