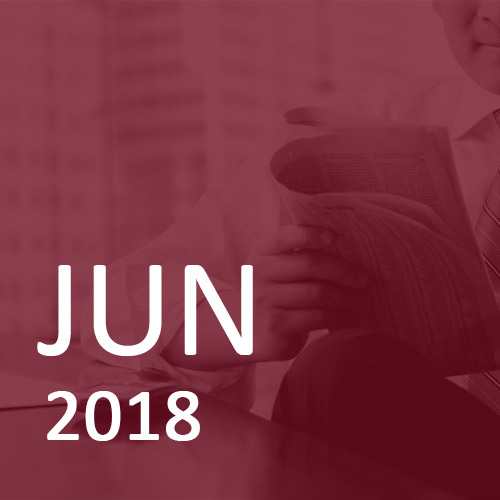 Stock-markets generally made positive returns in May; this despite the mini-Euro crisis towards the month end. In local currency terms the UK led the way with a gain of 2.8%, hitting a record high in the process. American shares rose by a similar amount but when translated into sterling the strong dollar helped produce a return of over 5%. European indices ended flat on the month. Events in Europe produced a dichotomy in government bond markets with prices in Italian, Spanish, Greek and Portuguese bonds plummeting whilst a flight to safety boosted prices on German, American and British bonds.

Italian politics knocked the Trump Twitter feed off centre stage. Presidential Tweets, including the off and then on peace summit with North Korea, pulling out of the nuclear deal with Iran and re-instating trade tariffs, were subject to the law of diminishing returns on market behaviour. In contrast, negotiations to form an Italian government which ultimately suited Brussels more than the Italian voters caused panic across European markets. Concern deepened as Spain lost its prime minister to a confidence vote and briefly it appeared that both Italy and Spain would entertain populist, euro-sceptic governments. In the event both countries reined in their anti-euro rhetoric allowing a period of (temporary) calm.

The Bank of England’s Monetary Policy Committee meeting passed without incident. The probability of a rate increase, highly anticipated up until April’s economic releases, had already been dismissed by market participants, though governor Mark Carney reminded us that it remained likely that interest rates would rise over the course of the year. Minutes from the US Federal Reserve’s latest meeting showed ongoing optimism but signalled some concerns that President Trump’s trade policies could have a damaging effect on business sentiment.

One of the month’s more interesting releases was the stronger than expected 1.9% rise in EU inflation. Only time will tell if this was a rogue number but, as it stands, the European Investment Bank’s criteria of “…below, but close to, 2% over the medium term.” Is glowing amber. There’s now an expectation that the ECB will use next week’s meeting to announce, or hint at, a timetable for ending the Asset Purchase Programme.

Globally speaking, we have continued to move into a period of higher growth, inflation and bond yields. While equites have benefitted from the accompanying growth in corporate earnings, bond markets have continued to sell off. In the US the yield on the 10-year treasury bond surpassed the critical 3% level for the first time since 2014.

Markets are having to come to terms with a major shift in policy as years of QE are gradually reversed. While central banks will endeavour to normalise monetary policy without causing market disruption there is no roadmap for this process historically, suggesting that a more volatile environment is here to stay, as execution risks remain elevated.

Last month’s turmoil surrounding the Italian political crisis was a further example of the heightened volatility of markets this year. So far, as with the previous falls in S&P futures, Facebook shares and US bonds, buying the dips has proved worthwhile. But we view these falls as warnings of how a large crowd rushing for one exit, with fading central bank support, can take prices way beyond fair value.

Against a more uncertain back drop, we are happy to maintain a strategy of continuing to avoid the political noise as far as possible, seek out less crowded lower risk areas and focus on fundamental value. We have used the recent recovery to take some profits in the UK and Europe, and for the time being, are happy to hold some cash to redeploy as opportunities present.

Our income portfolios switched from the M&G Emerging Markets Bond fund into the more defensive M&G Global Macro Bond fund. Although this will lead to a slight fall in yield, we felt that there was insufficient compensation for the risk of holding emerging market bonds with the potential risks of an escalating trade war accompanied by a rising US dollar.

We still have targets to further reduce risk, and to buy assets that we feel offer better value over the longer term.