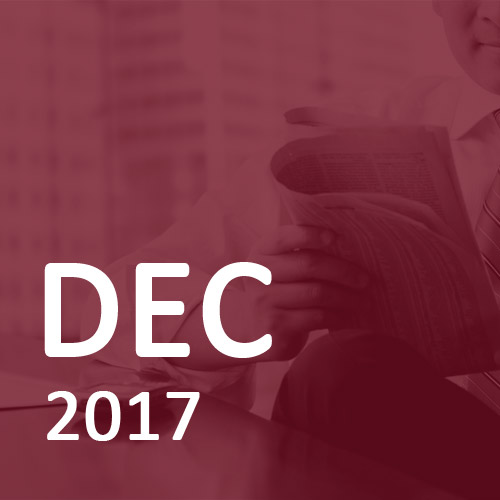 The world celebrated the first anniversary of President Trump’s election victory, and the fact that, to date, he hadn’t started a nuclear war. Neither has he built the Mexican wall, produced an alternative to Obama-care, signed off tax reforms or been impeached. However, US shares appear to have thrived off the good bits and ignored the rest, continuing to seek out new highs on a favourable economic backdrop.

In sterling terms, the US was alone in offering a small positive return; whilst Japanese and Hong-Kong indices reached their highest levels in over a decade (26 years in Japan’s case) they were unable to hold these gains and mirrored European and UK market falls of 1-2 percent.

Early December has witnessed global technology stocks being hit hard. Given the time of year it’s too soon to tell whether this is a turning point or simply profit-taking ahead of the year-end.

Minutes from the US Federal Reserve suggested that several members would be prepared to ‘look through’ continuing subdued inflation and vote in favour of a December rate rise.

The only notable feature of the UK budget was the chancellor’s gloomy downward revision to previous growth forecasts; they were possibly realistic, but honesty is neither expected nor rewarded in politics! Of far greater significance were the ongoing Brexit negotiations where a deal (in order to qualify for further negotiations) looked close, so long as the UK surrendered to all the EU’s demands.

As the year draws to a close we can reflect on investment markets that confounded most expectations with unprecedented low levels of volatility; despite the constant bickering between two unstable nuclear powers, weather of Biblical proportions and a turnaround in monetary policy, bonds didn’t collapse, and shares continued to rise with several stock-markets hitting record highs.

Paradoxically, the closer Theresa May gets to some form of Brexit deal, the greater the risk of ‘good news’ being perceived as bad news. The inescapable fact is that she is going to upset people what-ever she negotiates-the Irish border talks are just the most recent example. Team Europe can’t believe their luck in playing high-stakes poker with a novice and all the signs are that any deal will be to Europe’s advantage and a far cry from the hopes of Brexiteers. With the Conservatives in total disarray, and no strong alternative leader, the protests of a disillusioned public could open the door to the first socialist government in decades. And that really would be bad for UK shares and bonds alike.

Looking ahead to 2018, we’re seeing a gradual change in global monetary policy, which is some way off from tightening but is starting to be a bit less accommodating. We believe that geopolitical concerns will remain, and possibly intensify, and uncertainty over the eventual Brexit outcome, and possible change in government, will most likely dominate the UK economy.

We still expect a correction at some point and feel this would be a healthy reminder that markets aren’t a one-way bet. However, we appreciate that an environment of steady growth with low inflation will continue to attract investors seeking returns above those offered by cash deposits.

During the month we effected switches across the funds, taking new positions in UK equities, commodities and absolute return.

We switched our commodity exposure from the Blackrock Gold & General fund into the Old Mutual Gold & Silver fund.

We’re continuing to run diversified portfolios, with lower exposure to bonds, and with the capacity to take advantage of opportunities when they become available.