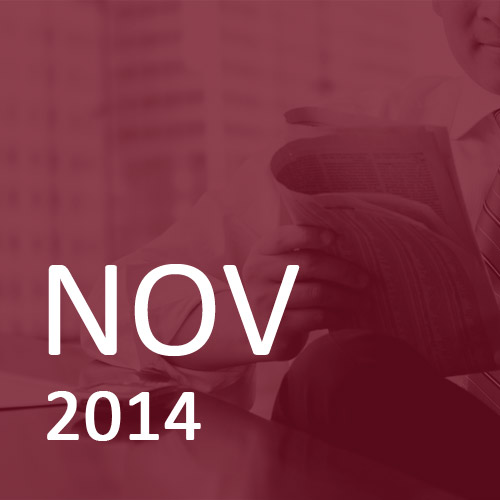 As the Federal Reserve’s Quantitative Easing programme drew to a close the Bank of Japan snatched the baton from a dithering ECB. The Japanese central bank surprised markets with a new stimulus package targeting purchases of longer-dated bonds and global, as well as domestic, equities. Japanese stocks rallied by over 8% although the falling Yen reduced this rise in Sterling terms.

October has ‘history’ in terms of stockmarket volatility and this year didn’t disappoint. At one point the FTSE was 10% below its September peak before ending the month barely changed. Government bonds ended the month 1% higher after seeing the yield on 10-year gilts drop briefly below 2%.

The ECB announced the results of its stress-test on European banks. Sufficient banks had failed the test to lend credibility to the exercise though remarkably none of the scenarios included a test for deflation in the Eurozone!

As global inflation continues to fall the starting date for any rise in interest rates (in the US and UK) is moving further away in 2015 and is currently getting closer to 2016. This might mean that expensive bonds remain expensive for longer as the search for yield continues.

One false market has been replaced by another, with the jury still out on the third. We have been waiting to see how markets coped without the Federal Reserve QE hand-holding but were thwarted by the surprise announcement from the Bank of Japan. This, together with the pro-equity asset re-allocation of the Japanese Pension fund, could give a further boost to risk markets. The ECB has declared its hand but characteristically hasn’t yet supported its rhetoric with actions. Unfortunately, as before, this will mean second-guessing some-one else’s buying intentions rather than paying attention to the fundamentals.

We feel that the fundamentals remain mixed. Growth in the US and UK remains positive but the nagging doubts over the lack of wage growth and the mountain of outstanding debts remain.

There is a danger that the further deterioration of growth across the Eurozone begins to impact on the UK economy. This, plus the uncertainty approaching next year’s general election, could lead to business putting investment intentions on hold.

Although the UK general election is still six months away UKIP’s success in the Clacton by-election has brought a new level of uncertainty to British politics. If Farage gains momentum in this month’s Rochester & Strood by-election then this will increase the likelihood of a referendum on EU opt-out in the near future. This will bring into question the likely impact on growth and how both the Country’s currency and debt should be valued as a more isolated economy.

Our under-weight fixed income view detracted slightly from our lower-risk portfolios’ performance but we still believe that commercial property and absolute return funds offer better returns over the longer term.

Our overweight exposure to Asia once again added value, rising by around 4%; our US fund also rose by a similar amount..

The strong US Dollar caused gold to sell off with a consequent 10% fall in our gold fund.

We continue to hold an overweight position in absolute return funds. These are a low-volatility alternative to cash and will allow us to put money back into the market when opportunities arise.