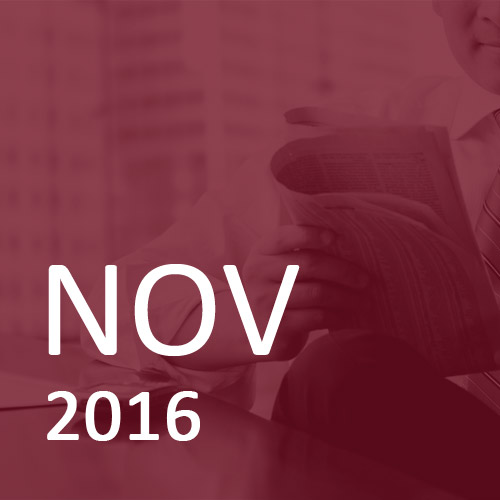 Once again the pollsters proved to be emphatically wrong and the stock-markets totally unreliable. The United States didn’t get their expected president and stock-markets didn’t produce the 10% fall that was widely touted in the unlikely event of a Trump victory. After a brief collapse share prices rallied, although an air of caution crept in towards the end of the week.

Stock markets ended October in positive territory although the UK suffered a setback following a High Court ruling which could postpone the Brexit process. Fixed interest bonds had a poor month with UK government bonds falling by up to 5%. This move continued post-election with the US 10-year bond rising back above 2% on fears that, in the US at least, bond-friendly measures would be replaced by more inflationary fiscal packages.

There were further signs of a gradual improvement in economic growth across many countries, emerging and developed. Unemployment generally continued to fall and manufacturing and service levels remained consistent with slow but steady growth. However, these signs may count for little until we get some detail on how the new US Administration plans to conduct itself on the global stage.

In the UK, the High Court ruled that the government would need parliamentary approval before triggering Article 50 to start the Brexit process. The government launched an appeal but thoughts that a ‘hard Brexit’ would now be less likely took the gloss off the UK stock-market and caused the currency to rally.

Despite a mountain of post-election research, the markets won’t know what effect Trump’s presidency will have on global markets for some time. Comparisons with Brexit are boring but there are similarities in that markets continue to ‘price in’ change with very few facts to go on. As with the Brexit referendum nothing changed immediately other than the psychology of ‘a major change’ and the interruption to ‘business as usual’; initial market moves are based on campaign slogans which often prove to be wide of the mark.

In the UK, the High Court ruling on Article 50 has introduced fresh uncertainty, initially until the appeal ruling is delivered and then, depending on the outcome, there could be a prolonged period of national cross-party negotiations before embarking on discussions with EU counterparts. Clearly this is a process that needs to be done correctly but these delays are more likely to be negative for growth in the short term.

The Brexit and Trump victories are being cited as examples of a new era of anti-establishment voting, which should make the bureaucrats of the European Union very nervous. With a referendum on the constitution in Italy in December, and elections in Germany, France and the Netherlands over the next twelve months, there might be some softening of the dictatorial attitude from Brussels. Further, if Germany feels more isolated by the prospect of a more protectionist stance by the US then it might be more accommodating in trade discussions with the UK.

All of this, plus a greater uncertainty over wider geopolitical issues and a global mountain of debt, mean that we anticipate an interesting but possibly volatile year ahead. Events this year have shown the costs of taking bets on major outcomes and the benefits of holding a robust, diversified portfolio.

Before the election we added a global short-dated index-linked fund to our balanced risk portfolios, replacing part of our holding in corporate bonds. We feel that this will provide better protection in the event of higher inflation and rising bond yields.

We bought the Sarasin Food and Agricultural Opportunities fund for our medium-high risk funds; the higher risk funds already own it.

We continue to view fixed interest bonds as offering little reward for the risk of capital loss and prefer a combination of property, absolute return funds and equities. In the UK the lower currency increases the likelihood of higher inflation, supporting our preference for index-linked stocks within the fixed interest sector.

With much uncertainty over the coming months we’re maintaining diversified portfolios with the capacity to take advantage of opportunities when they become available.