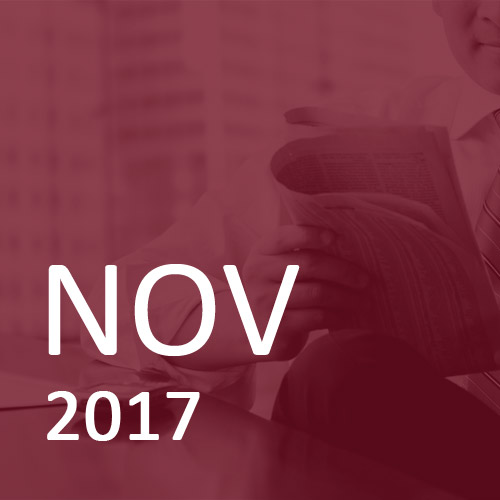 The US, UK and several European stock-markets hit fresh highs, and fixed interest markets ended the month slightly higher despite a slight withdrawal of monetary stimulus. In sterling terms, European and UK shares were up by over 1% whilst stock-markets in the United States, Japan and Asia rose by 3 to 6 percent.

For the first time in a decade the Bank of England raised interest rates, by 25 basis points to 0.5%. This was as expected, but Governor Carney’s comment that two more rate hikes would be necessary to bring inflation back to target was unusual in that central bankers rarely offer such specific information.

The European Central Bank kept interest rates unchanged but announced that, from January 2018, monthly bond purchases would halve from Euro 60 billion to Euro 30 billion. It also clarified that interest rates wouldn’t rise until well after the end of Quantitative Easing.

Minutes from the US Federal Reserve showed that whilst some members remained concerned at persistently weak inflation, solid economic growth made a December rate rise more likely. President Trump entertained the financial world with a tweeted adaptation of his reality show, The Apprentice, with Chair of the Federal Reserve, You’re Hired. The winner was existing Fed’ member Jerome Powell who will replace Janet Yellen next year.

Illusionist David Copperfield would have been impressed with Mario Draghi’s conjuring trick following the recent European Central Bank meeting. President Draghi managed to portray a halving of the monthly bond purchases (QE) as an extension of quantitative easing (from January to September, or beyond!). Governor of the Bank of England, Mark Carney, pulled off a similar feat when announcing a rise in interest rates, with the need for two more; not quite ‘one and done’ but investors took it that rates wouldn’t be going above 1% for some years. In contrast to the Taper Tantrum of 2013 central banks have become quite good at tightening policy (reducing accommodative policies) without spooking investors.

Currently a dichotomy of views explains the sanguine attitude of investors. Optimists point to the combination of strong growth with subdued inflation as a positive environment with little need for higher rates; pessimists say that central bankers are aware that there’s too much debt in the global economy to risk pushing rates much above current levels.

Whatever the reason, investors currently believe that interest rates will remain low and have driven stock-markets around the world into new territory; this doesn’t make us bullish, but it does suggest that the rally might have further to go. Growth prospects are improving for now, inflation remains subdued and central banks are keen to emphasise their slow and steady approach to removing monetary stimulus.

We are aware though that markets are most vulnerable when sentiment shifts to an extreme. Economic growth is encouraging but this has been achieved through trillions of dollars of stimulus and record low interest rates; a lot of good news is priced into valuations and we need to see how investment markets and the real economy adapt to less accommodating policies going forward. In addition, politics, both domestically and globally, are giving increasing cause for concern. The latest escalation in Middle-East tension between Saudi Arabia and Yemen/ Iran as well as a Saudi in-fighting has contributed to the price of oil hitting a two-year high.

However, in the absence of any shock the ongoing demand for income is likely to support equities and, to some extent, fixed interest.

In contrast to last month, our overseas funds boosted performance, though this had more to do with stronger stock-markets than any currency effect.

As uncertainty over wider geopolitical and economic issues spread we’re maintaining diversified portfolios with the capacity to take advantage of opportunities when they become available.