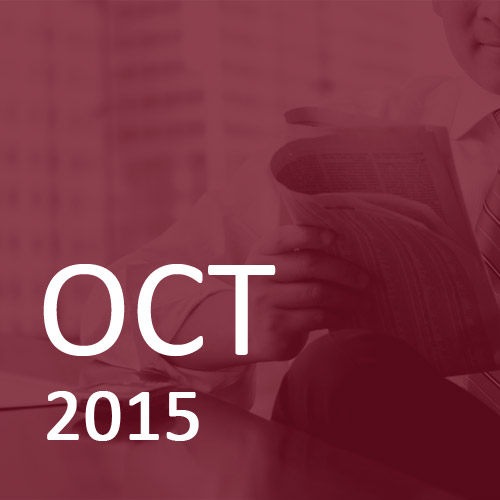 A combination of deteriorating economic news and a few specific corporate ‘upsets’ compounded stock-markets’ losses from August. A wide spread of forward-looking data supported fears that the slowdown in emerging markets could lead to slower growth across the developed world. Over $40 billion left emerging markets in the third quarter as investors waited nervously for a rise in US rates that was expected to hit these markets in particular.

The US Federal Reserve’s credibility took a blow when, despite having guided that they might be prepared to raise rates in September, they voted for no change, citing the turmoil in global economies. Rather than calming markets this inaction engendered fears that ‘things must be really bad’, prompting further stock-market falls.

A worsening news flow included credit downgrades to Japan and Brazil, the slowest fixed-asset investment growth in China for 15 years and the International Monetary Fund (IMF) cutting its forecast for global growth to just above the level generally associated with a recession. Frequent attempts to rally shares were knocked back and talk of a bear market gained traction. Ironically the turnaround followed poor US employment numbers; the perception that any rate rises would be pushed further into the future renewed investors’ appetite for more risk.

Despite how we might feel when the monthly bills arrive it’s the lack of inflation that remains a worry! The official measure of consumer prices was unchanged on a year ago in the UK whilst prices fell in both the US and Euro-land.

Developed markets fell by a further 2-3%; the exception being a 6% fall in Japanese shares. Property continued to eke out small but steady gains and government bonds benefitted from a flight to safety. However corporate and high-yield bonds suffered small loses as VW and Glencore soured sentiment already weakened by fears of default in the energy sector.

After a tumultuous couple of months we wouldn’t be surprised to see a more positive market reaction; the level of bearishness makes markets ripe for a squeeze higher but the extent and duration of any rally is harder to call.

If investors start to believe that interest rates will remain unchanged indefinitely then we could see a resumption of the search for income. In the UK, for example, fixed interest market rates imply no rate rise until 2017; at the same time shares in major companies like HSBC, Vodafone and Glaxo Smith Kline are yielding 5-6%.

Over the past few months emerging markets have suffered on fears that higher US rates would make their external debts more expensive to fund; if a rate rise is off the cards for now then it leaves scope for improvement in Asian and emerging markets.

However, it concerns us that all the macro issues that led to the recent sell-off remain unresolved. Several members of the Federal Reserve have been at pains to say that a rate rise before the year-end isn’t off the cards; it is only likely to be deferred for longer if a slowdown in economic growth becomes more evident, and that’s unlikely to be good for stock-markets.

Fixed interest bonds offer limited protection against rising rates at these levels. We think that prices might rise further in the event of weaker economic data but that the balance of risks favour low exposure to rising yields.

Once again our funds held up well relative to the wider markets. This was due in part to our cautious positioning in less volatile sectors but also to good fund selection.

Our recent selective investment in Europe held up well; despite a fall of over 3% in the STOXX Europe 600 the Jupiter European fund ended the month with a small gain. In a similar vein our holdings in Asia and emerging markets all produced small gains in the face of falling indices.

In the current environment we continue to favour funds that rely on a consistent income stream rather than capital gains from rising share price valuations.