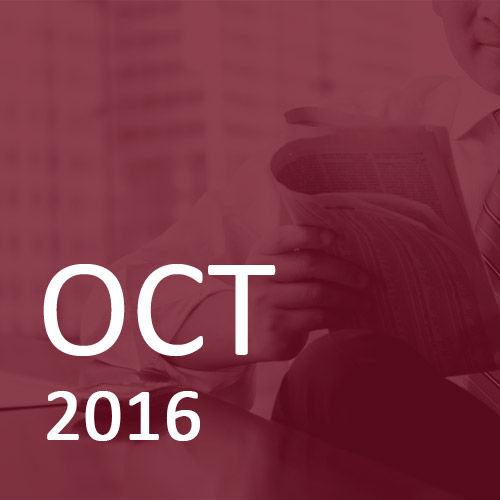 Central banks continue to dominate markets, though the inconsistency of their views isn’t helpful. In summary, the US would like to raise rates but is scared of triggering a global sell-off, the European Central Bank has further downgraded its forecasts for growth and inflation but no longer feels confident in its current policy, the Bank of England thinks it needs to cut rates further but recent data doesn’t warrant it and the Bank of Japan announced a change from targeting monetary policy to dictating the level of bond yields (an old trick to help banks make bigger profits)- an acknowledgement perhaps that Japan’s recent move to negative interest rates isn’t working.

Following a calm September volatility picked up in early October. Prime Minister Theresa May used the Tory party conference to upgrade her definition of Brexit to ‘Brexit means hard Brexit’. Fears that this would rule out participation in the EU single market, and therefore lead to a slowdown in growth, sent sterling plunging to a 31-year low whilst the main UK index briefly hit a new intraday high.

During September stock-markets edged higher with gains of around 1% in developed markets. Bonds fell slightly, with the exception of UK index-linked bonds, whilst gold and oil rose by just over 3%. Equities added a further 3% in sterling terms over the first couple of weeks of October.

Moving into October reports, subsequently denied, that the European Central Bank were contemplating tapering off their bond purchases spooked the bond market. This, together with fears of Brexit-induced inflation in the UK, caused bond yields to rise, to +5 basis points on 10-year German bonds and back over 1% on similar UK bonds. Although still remarkably low this represents a doubling of yield from the 50 basis points low back in August.

UK government bond yields currently imply that short-term rates will still be close to 0.5% in 30-years’ time. Given that, as an industry, we struggle to accurately forecast one year ahead this assurance of ‘low forever’ borders on insanity!

In the aftermath of the Tory conference the battle-lines for Brexit have clouded over with further ambiguity over the hardness of Brexit. It’s not certain whether this is the result of in-party disagreements or some back-tracking by Theresa May filtered through ministerial briefings. Regardless, the fate of sterling and equities with overseas exposure will rise and fall with the politics.

Brexit apart there’s still plenty of confusion as to the state of the global economy. Despite a month of generally encouraging data, growth forecasts still have a downward bias. Clearly central bankers share this uncertainty and lack the confidence in global growth to tighten money supply. Discussions are turning to whether fiscal stimulus would be more successful in bump-starting the real economy, if necessary at the expense of investors.

Central bank policy is encouraging poor decision-making by investors, firstly in buying assets in the belief that prices will always be supported by central bank buying and, secondly, in seeking income from investments without understanding that they might lose some or all of their capital.

For now, markets are supported by these factors; the many global concerns are known and therefore unlikely to shock. However, history shows that time and again complacency is punished and we remain wary of a shock to markets at some point.

We made no changes to our portfolios over the month. The rally across equity markets has been stronger than we anticipated but we expect volatility to pick-up heading towards the Christmas period.

Our overseas holdings have continued to benefit from gains when translated back into a weaker sterling.

We continue to view fixed interest bonds as offering little reward for the risk of capital loss and prefer a combination of property, absolute return funds and equities. The recent plunge in sterling increases the likelihood of higher inflation, supporting our preference for index-linked stocks within the fixed interest sector.

Both the property funds that we invest in rose by just over 2% in September and confirmed that they will be lifting the suspension on dealing during October. Given the exuberance, and strong correlation, across other asset classes we regard property, along with gold, as a useful diversification of risk.