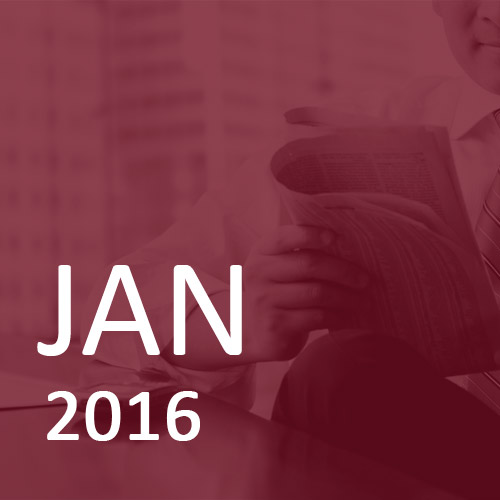 Sleeping through the market noise

My greeting will resonate more with those owning gas-guzzling cars than oil wells, or equities for that matter.

China welcomed us back from the New Year break with not one but two 7% falls in the first week. Other markets joined the melee, following the downward spiral in the oil price. At the time of writing the FTSE has fallen by around 7% this year, the US S&P 500 by around 5%.

The media is currently thriving on a glut of gloomy headlines so I’d like to try and put it into some context and explain how we run our portfolios.

Over time investment markets have suffered regular sharp falls; it’s just that for several years following the credit crisis volatility has been extremely low with little risk in holding pretty much anything so long as a central bank was behind you supporting the price. Now that the support has largely been taken away, investors have returned to assessing markets on fundamentals, such as earnings potential and valuations; this has resulted in differences of opinion and a return to more volatile markets. 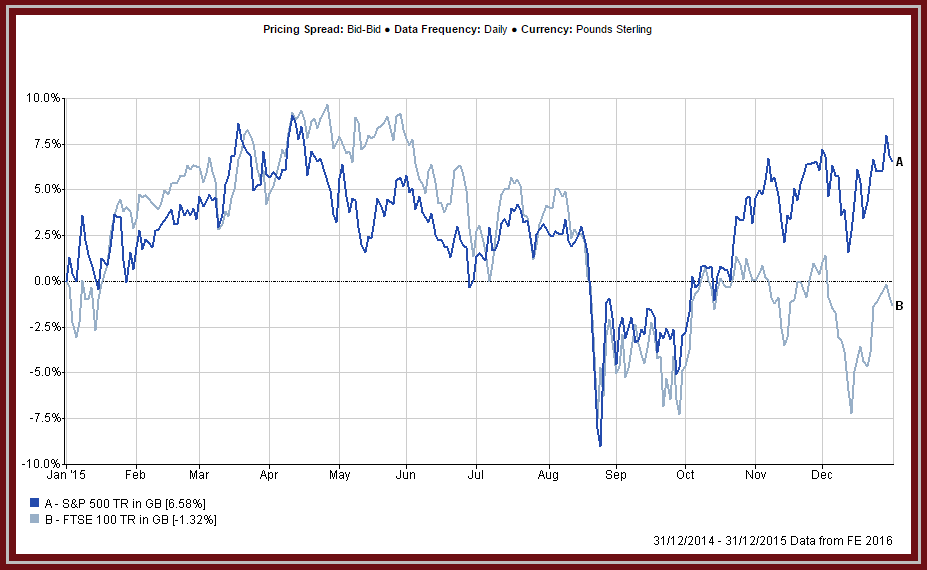 You can see from the chart that there were several sharp falls, followed by rallies, in the FTSE 100 and the US S&P 500 during 2015; these were reflected across global markets to greater or lesser extents. The net result was small gains or losses across developed markets (FTSE 100 fell by just over 1%), small reward when measured against the sleepless nights of June, August and December.

You trust us to look after your wealth, so that you can get a good night’s sleep, so I’m going to briefly explain how we aim to protect your money and, over the long term, help it to grow.

Unfortunately, the Financial Conduct Authority has banned the use of crystal balls so we’re unable to predict with any certainty when share prices will rise and fall. Instead we build portfolios of funds that we believe will show good gains over the longer term but without bouncing around too much every time investors get nervous. Check out the chart below: 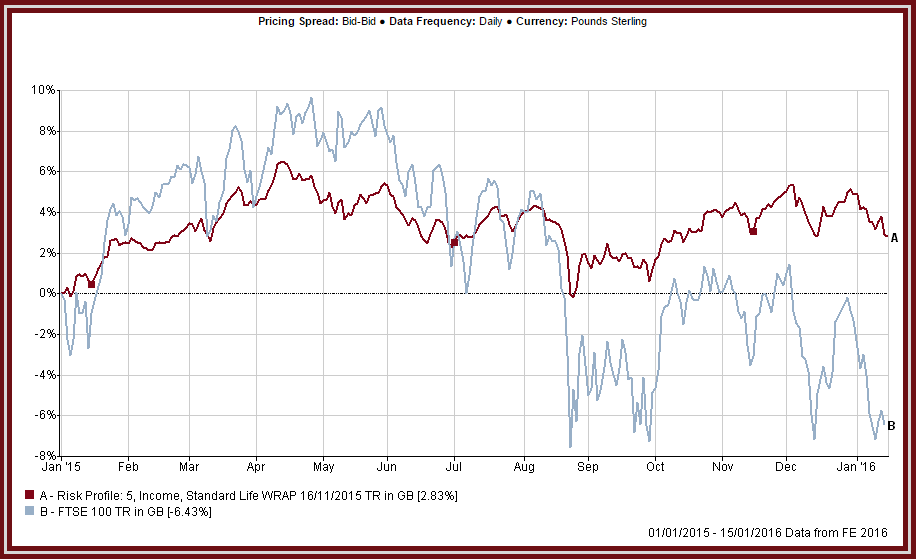 The example here is one of our medium-risk income portfolios plotted against the FTSE 100. There are two points to make here:

1) The chart shows how the value has tracked a far smoother path through the more general turbulence.

2) It also shows that we produced a positive return at the end of the period, just short of 3% in absolute terms but 9% better than the FTSE index.

What we look for in a portfolio

We aim to build robust portfolios that will stand the test of different macro-scenarios. We put together a combination of assets that we hope won’t all rise and fall together; this has been much trickier since central bank quantitative easing made fixed interest even more expensive than equities! We look to create a blend of developed and emerging equity market funds, fixed interest bonds, commercial property, commodity and absolute return funds.

The second part of the process is fund selection. Here, and trying to keep jargon to a minimum, we don’t just look for out and out performance-some funds will look good just from taking a huge bet on the market. We look at how much of the performance is due to the management team (alpha) rather than market exposure (beta) as well as how much the price moves around compared to other funds (volatility). We focus on funds with a low maximum draw-down; that’s the maximum loss if someone had bought at the highest price and sold at the lowest in the past 3 years. Finally, we pay a lot of attention to data relating the fund performance to the amount of risk taken (Sharpe/ Sortino). For example, we would prefer a fund that gained 10% with lower risk than a fund that had made 12% but taken significantly more risk.

The idea here is that we catch much of the upside, but don’t get hit as hard when markets fall; this is demonstrated well in the chart below which shows the same fund’s performance over the past 3-years. 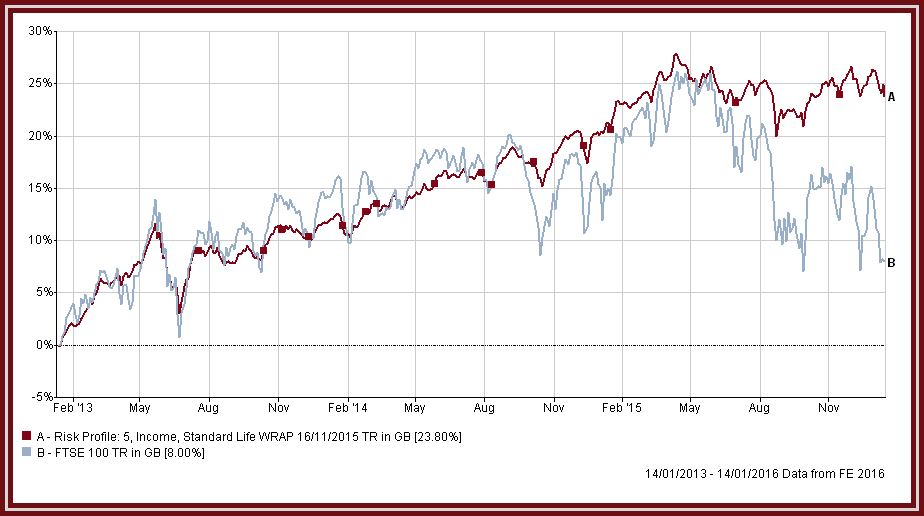 Our portfolios are structured to maximise returns on a risk-adjusted basis by selecting investments with a proven ability to generate good returns in a lower risk, lower volatility manner, helping you to enjoy a better sleep at night.