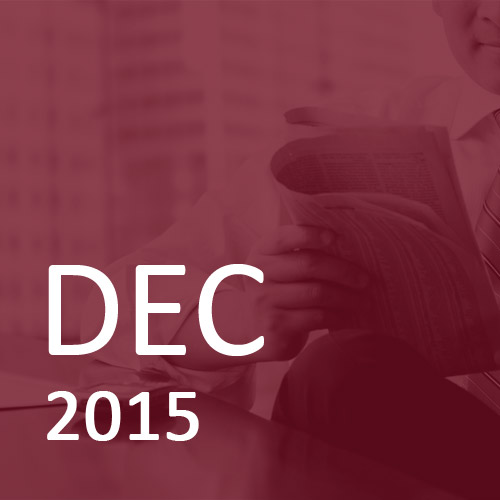 Travelling but not quite arriving

The investment market is riddled with well-worn clichés, one of which relates to travelling and arriving. Simply put, the market will adjust prices in anticipation of a known or likely event then, when that outcome is confirmed, the most likely reaction is a bout of profit-taking by short-term traders.

December plays host to two such events, the Yuletide meetings of the European and American central banks. The meeting of the US Federal Reserve is a couple of weeks off and has a binary outcome, either it will raise rates by 0.25% or it won’t. However, last Thursday’s meeting of the European Central Bank (ECB) was loaded with anticipation, primed by recent hints from President ‘Super’ Mario Draghi. Market expectations centred on a 0.15% cut in interest rates and increases in both the amount and scope of the Quantitative Easing programme. The other given, based on previous experience, was that Draghi always under-promises and over-delivers; this led to many silly discussions about how much was actually priced into various asset classes. In the three weeks leading up to the meeting the German stockmarket rose by nearly 700 points, the German 10-year bond yield fell by 0.25% and the Euro continued its steady fall; these moves were reflected to varying degrees across global markets.

Unfortunately for traders, to stay with the travelling cliché, the Bournemouth to London express ended its journey at Woking! The ECB announced a smaller (0.10%) cut in interest rates and an extension of the QE period from September 2016 to March 2017, but no increase in the monthly purchases; actually, extending the period was unnecessary as there was already the option to continue QE beyond September if inflation remained stubbornly low.

What followed was more than a bout of light profit-taking. You could call it ingratitude but in the market’s eyes the ECB had come up short; Draghi had over-promised and under-delivered. The German stockmarket collapsed 400 points on the day, bond yields rose sharply and the Euro saw its second-biggest up-move against the US dollar in its history.

Incidents like this are nothing new, but do typify the higher levels of volatility suffered over the past year. These have become more pronounced as investors try to exit ‘crowded trades’ in markets with poor levels of liquidity. Stripping out the jargon, when a lot of investors want to exit a popular trade they find that there aren’t enough people prepared to buy their stock.

So how do we manage your funds during these periods? We work hard at putting together a robust portfolio of diverse investments designed to protect against the worst stockmarket outcomes. The chart below shows how our income fund has steered a steady course through the year with fewer sharp price movements than UK shares and bonds. 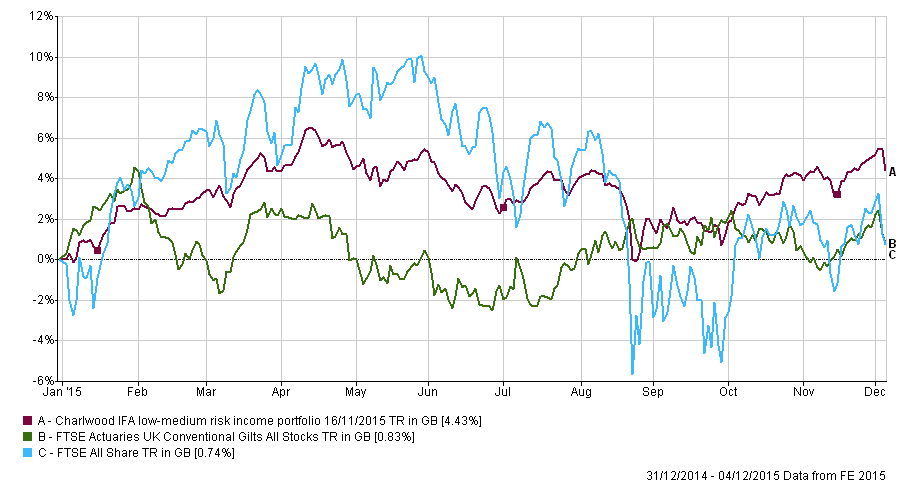 We don’t aim to actively trade the regular peaks and falls, but to look to use the extremes as opportunities to alter the balance of our portfolios.

Looking forward to 2016 the outlook remains muddled with a lot of very clever people convinced that global economies will either speed up or fall back into recession! Whatever the outcome of December’s US Federal Reserve meeting next year will see continued speculation on the path of interest rates and the actions of central bankers. We don’t know the answers but, expecting volatility to persist, will continue to look after your money without giving you sleepless nights.