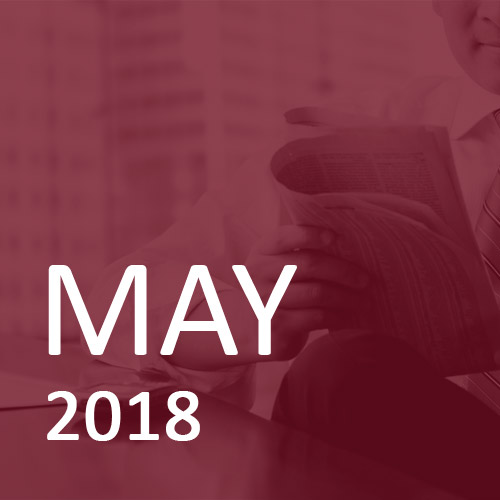 To the casual observer last month’s price action would have appeared counter-intuitive. The UK stock-market’s response to consistently weaker economic data was to rally share prices by up to 7% with the biggest moves generally coming from the larger more overseas-orientated companies; by contrast, US indices were broadly flat in dollar terms despite a better-than-expected earnings season and ongoing evidence of growth. European shares also benefitted from a falling currency and rose by over 4%. Japanese and Asian shares rose by around 3%.

In the UK economic growth for the first quarter barely registered, showing a rise of just 0.1%; this followed weaker than expected inflation, retail sales and consumer credit data. Whilst some of the numbers reflected the impact of March’s unseasonal weather, the near stagnation raised questions about the underlying strength of the economy. That left an interest rate rise in May no more than a remote possibility.

Growth in the eurozone hit its slowest pace for a year and a half in the first quarter of 2018, confirming fears of a slowdown in the single currency area after a stronger-than-expected 2017. The economy of the single currency area grew by 0.4% between the end of last year and the opening three months of 2018, compared to 0.7% for the final quarter of 2017.

Governor of the Bank of England, Mark Carney, said there “will be some differences of view” at May’s Monetary Policy Committee meeting and that he is “conscious that there are other meetings over the course of this year”. Together with the weaker economic data, this was taken as guidance that the Bank could afford to leave rates unchanged for now and assess the situation over the course of the next few months.

The UK’s Monetary Policy Committee have an interesting dilemma; recent economic data, including inflation, have weakened (notwithstanding the rise in employment to a record high). By historic standards the economy isn’t showing the strength that would normally provoke a rate rise. But, taking a step back, we need to consider whether the situation is dire enough to warrant the continuation of the historically low ‘emergency rate of 0.5%’ set after the Great Financial Crash. True, levels of debt are too high, and would be vulnerable to higher interest rates, but it seems unlikely that these debt levels will fall whilst the cost of borrowing is so cheap.

Price action in the US stock-markets has been note-worthy. With over half of the S&P 500 companies having released their first-quarter results, almost 80% of them topped analysts’ expectations; according to Thomson Reuters, earnings are now on course for a rise of nearly 20% compared with the first quarter of last year. And yet, the stock-market was barely positive over the month and technically looks set for further falls. We shouldn’t be surprised by this, having long argued that share prices were allowing for a lot of good news, but it is an interesting turn-around.

During the month the yield on the US 10-year government bond pushed above the 3% level. Although it’s fair to ridicule the significance of 3%, as opposed to 2.95%, it’s the highest level for four years and is a big deal to bond traders. It also seems to be a big deal to equity investors in the US, who feel that if 3% is broken in a meaningful way, and so early into the Quantitative Tightening process, then there’s a greater chance of higher long-term rates, and that won’t be good news for companies.

Emerging markets may be a developing concern. By their nature there are always idiosyncratic problems (Argentina, Venezuela, Turkey) but the numbers look to be increasing at a time when the US dollar is back in favour. In the past, there has been a strong link between a rising dollar and falling emerging markets.

In early May one of our target levels were met, triggering the sale of a UK equity tracker fund and, for the higher-risk portfolios, the disposal of the Jupiter European fund, which has performed extremely well.

We still have targets to further reduce risk, and to buy assets that we feel offer better value over the longer term.