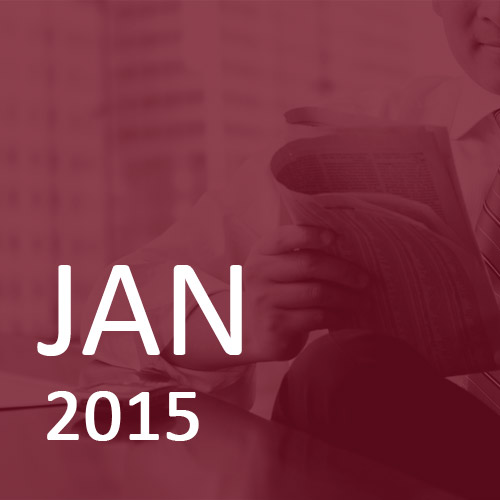 December offered a glimpse of the type of market behaviour that we can expect to feature in 2015-slightly unexpected moves driven by a lack of liquidity and a realisation that many asset values have been distorted by persistent central bank buying.

The continuing fall in the oil price has been the dominant story. The debate continues as to whether this is a good or bad thing but in the short term equity markets are taking it as a negative. The focus is less on the increase in disposable income and more on the implied lack of demand, deflationary effects and the financial strains imposed on energy-producing companies and countries.

Inflation became deflation in the Eurozone before catching the EuroStar to present the UK with the 1% reading recently predicted by Bank of England Governor Carney. Bond yields fell as the anticipated rise in interest rates moved further into the future. The British government can currently borrow money for 10 years at just 1.6%.

Mario Draghi repeated his hints that the ECB would embark on a programme of buying Sovereign bonds; his latest assurance that details would be forthcoming at the January 22nd meeting helped spur European 10-year bond yields to record lows. Greek bonds were the exception, rising to over 10%.

Iceland decided that they don’t want to belong to any (EU) club that would have them as a member. Greece could follow suit if a snap election at the end of January puts the Syriza party in power.

Our main reason for caution is waiting for the transition from markets driven by central bank buying (QE) to one based on fundamental values. We had a brief glimpse of this in October when the end of QE in America caused markets to fall sharply, but this was rudely interrupted by a QE announcement from Japan and hints by the ECB, which have yet to be fully implemented.

Economic growth in the US compares well to the rest of the world but needs a period of consolidation to allow company earnings to catch up with market valuations.

Uncertainty ahead of May’s general election, and the likelihood of a hung parliament, could undermine Sterling assets. We feel that any coalition is unlikely to cause lasting damage to the recovery and will look for buying opportunities on weakness.

If fears of deflation persist then yields on fixed interest bonds could continue to fall, but the reward on offer is increasingly out of synch with the potential interest rate and credit risk.

So long as interest rates remain at historically low levels, in many cases offering negative returns after adjusting for inflation, then other asset classes will offer attractive alternatives.

The start of a new year may typically be associated with new beginnings but for us isn’t a reason to change our views. For now our portfolios reflect the same overall views as before. However, within that we have made two changes. Across the risk models we have included the Invesco Global Targeted Returns fund and on the income portfolios we have bought the new TwentyFour Corporate Bond fund.

We feel that there is still more mileage to be gained from our property holdings where yields compare favourably to fixed interest bonds.

Japan, Asia and selected Emerging markets continue to offer good value but in the short term the strong dollar could cap returns.

We feel that most markets fully reflect expectations of good news that might take some time to arrive. However, as the past two years demonstrated, when central banks are calling the shots markets don’t focus on value. Whilst this persists we are strongly in favour of running well-diversified portfolios.

We expect a rise in market volatility and will look to take advantage of these moves. We are keeping a portion of the portfolio in low-risk absolute return funds ready to switch into good long-term investments when opportunities arise.