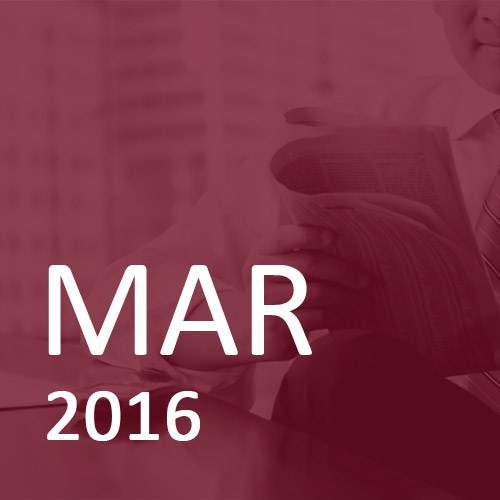 February really was a clichéd month of two-halves. Most stock-markets, including the FTSE 100, fell by between 5-15% in the first couple of weeks but closed the month in, or close to, positive territory. The performance of fixed interest bonds was mixed; where-as government bonds were seen as a safe haven, with many hitting record low yields, bonds issued by corporations suffered from the same risk-aversion trade as equities, with bank debt in particular struggling to find buyers.

Although it was greeted with much cynicism at the time, the agreement between Saudi Arabia and Russia to freeze oil output at January’s levels coincided with a rally across markets. Crude oil, which had been down 20% on the month at one point, rallied to end the month around 3% lower (it’s currently +12% on the February month-end). Shares followed suit with strong performances from Asian and emerging market countries.

With the notable exception of employment, economic data was generally poor; forward-looking surveys added to fears of a global slowdown and inflation remained benign with the Eurozone returning to deflation. Whilst some form of further stimulus is expected from the ECB’s March meeting, Governor Kuroda of the Bank of Japan said that he wasn’t thinking about cutting rates further (last time he said this it held true for 1 week!).

In the UK, Governor of the Bank of England Mark Carney suggested that the Bank could still cut interest rates, though not below zero.

The strong surge in the gold price indicates all too well the loss of confidence in (central bank) policy makers. Einstein’s definition of insanity was doing the same thing over and over again but expecting a different result. The developed world’s central banks have provided huge levels of monetary stimulus (QE) with the aim of boosting inflation and yet this has had no significant effect. For example, the European Central Bank began its Quantitative Easing programme in March 2015 but a year later headline inflation stands at -0.2% compared to -0.1% last March; core inflation also remains at the same level as last April!

Whilst central bankers clearly aren’t insane there’s a growing perception that they’re making it up as they go along. The more recent example has been to drive interest rates further into negative territory, the theory being that it would encourage banks, corporations and individuals to go out and spend. What they don’t appear to have taken account of is that, firstly, banks tend to make more money by increasing margins when interest rates are rising and, secondly, that companies and individuals are more likely to spend when confidence is rising-neither of these factors are evident at the moment.

That said, we’ve noticed some lifting of the extreme gloom surrounding the start of the year; equities have rallied well and US high-yield (Junk) bonds witnessed the highest inflows since records began in 1992. This week iron-ore recorded its biggest ever 1-day gain (+19%).

Do we trust this move? No, not really. The oil price may have bottomed but there’s still too much debt in the system and a reliance on central banks coming to the rescue. The change in banking regulations means that the lack of market liquidity is likely to remain an issue leading to exaggerated moves in either direction as either ‘risk-on’ or ‘risk-off’ trades play through. We’re currently in a unique phase where either a rise or cut in interest rates is likely to be perceived as bad news. We doubt things are as bad as recently painted by the media, and markets could easily end the year higher but we still hold the view that there will be swings in both directions before then.

The overweight positions in Asia and emerging markets served the funds well with monthly rises of 3-8%. By contrast Japan lost 3% as investors remained sceptical of official policy and the Yen continued to rally in the face of negative interest rates.

The Blackrock Gold & General fund continued to make a worthwhile contribution, rising by a further 34% during February.

We expect market volatility to persist and are therefore continuing to run robust portfolios that aim for performance over the longer term but with lower than average price movements during uncertain times. It’s precisely these market conditions that offer opportunities to invest for future long-term gains.