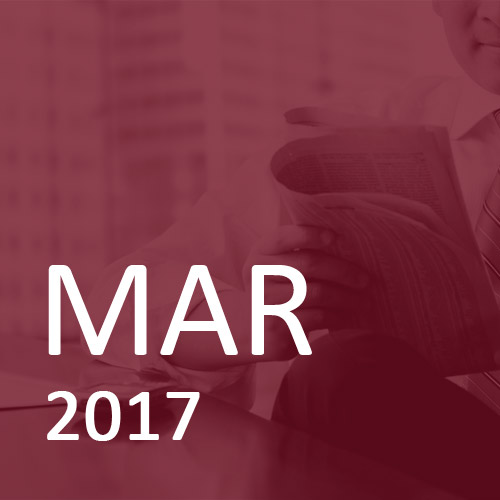 The ‘Trump is good for growth’ phenomenon picked up pace during February, driving stock-markets in the US and UK to new highs. Positive sentiment bordered on the absurd when shares rallied after Trump’s speech to congress-instead of reacting negatively to the lack of detail in his plans for tax cuts and fiscal spending, investors were encouraged because he ‘sounded more presidential’!

Leading stock-markets gained between 2.5-5% in sterling terms, US stock-market gains of 5% also reflecting a stronger dollar over the month. Shares in the UK rallied by around 3%, Europe was a touch less, Asia and emerging markets a touch more. More bemusing, given further evidence of rising inflation, was the strong performance of fixed interest bonds; UK gilts were over 3% higher by the month-end.

Members of the US Federal Reserve were busy dropping their strongest hints yet that the next rise in interest rates could be announced in March. With the market currently attaching a probability of over 90% to this action it would seem foolish to spurn the opportunity, and failing to act might even spook investors that the Fed’ know something that they don’t.

Both the UK and European central banks voted in favour of maintaining accommodative monetary policy, choosing to ‘look through’ short-term overshoots in inflation. In the case of the UK concerns remain that Brexit uncertainty will lead to a slowdown in growth (recent forward-looking data supported this view) whilst the European Central Bank want to provide stability throughout the course of European elections this year.

The great economist, John Maynard Keynes once said that, “The market can remain irrational longer than you can remain solvent”. By historic measures stock-market valuations, in particular the US, look excessive. This doesn’t mean a crash is imminent; prices could continue to rise for many months. But, given that we have no privileged insight into timing, it does suggest that a more cautious approach is sensible.

Accommodative monetary policy in Europe, the UK and Japan continues to provide a comfort blanket to investors; the question is, with rising inflation and buoyant economic data, how long this can continue for?

Headline inflation is now at, or approaching, levels that either require a tightening of monetary policy, or an explanation as to why central banks are prepared to ‘look through’ current data. In the US, the Federal Reserve look certain to increase rates in March, and investors appear happy with that. The current ‘glass half-full’ interpretation is that economic growth must be strong if the Fed’ are happy to act. The European Central Bank is mandated to target inflation at ‘below, or close to, 2%’. With EU inflation currently bang on 2%, and forward-looking business data at the highest level for over 5-years the debate over the need to change monetary policy is likely to heat up, especially from the German end.

In addition to a likely US rate hike, March will see the UK Budget, elections in the Netherlands and the strong likelihood of Theresa May triggering Article 50 to begin two years of negotiations to leave the European Union. Our impression is that there’s now less cash on the side-lines to be invested on set-backs, although so long as interest rates remain at record lows the search for higher income will remain.

Our portfolios retain a cautious profile; Whilst this detracted slightly from the month’s performance it’s a view that we remain comfortable with.

The recent addition of a further bond fund to our cautious portfolios bore fruit over a month that saw strong performances from fixed interest bonds. We still prefer equities to bonds over the longer term, but feel that in the near term there’s a risk that markets have over-shot and that a correction in equities could send bond yields lower.