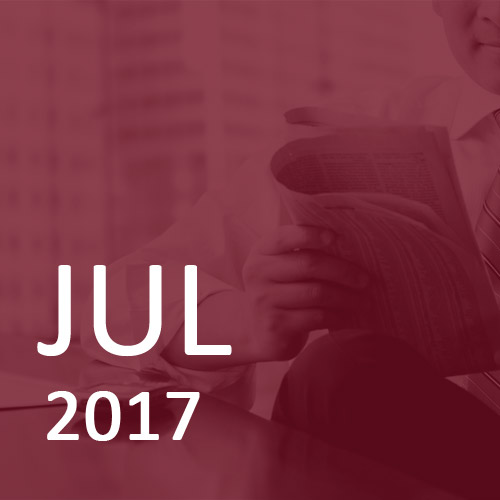 Central bankers changed the mood-music, resulting in a small rise in volatility. Investors were left guessing as to whether the move was co-ordinated as policy-makers in the US, UK, Europe and Canada all talked up growth prospects and hinted at monetary tightening further down the road. Government bond yields rose during the month and stock-markets in developed countries fell by 1-2%. After hitting new highs US stock-markets ended the month slightly negative in sterling terms.

Shares in the UK fell by 2-3% as a shocking election campaign produced a lame-duck Prime Minister, acrimonious political in-fighting and no apparent policy on either running the country or negotiating its exit from Europe.

The US Federal Reserve raised interest rates by the expected 0.25% and signalled the likelihood of one more rise this year. Minutes from the meeting also confirmed that the board is preparing the ground to start unwinding bond holdings accumulated through the quantitative easing programme.

Despite the change in central bankers’ rhetoric, markets have moved little. By recent standards bond yields showed a sharp adjustment but most stock-markets remain close to their recent highs. We can’t be sure whether policy-makers are being deliberately ambivalent or whether they genuinely don’t have a clue but feel the need to say something. The US Federal Reserve is more consistent in its approach to a gradual tightening process, but both the Bank of England and European Central Bank occasionally talk tough but look more like closet-doves.

Several members of the Bank of England’s Monetary Policy Committee have well-documented concerns about the effects of Brexit-related uncertainty on the economy, currently supported by a slower (election-related?) June, but the question remains as to how much inflation they’re prepared to tolerate.

Despite UK employment being at a record high, there are concerns over consumers’ ability to spend; consumer spending accounts for around 60% of the UK’s growth. Retail sales barely rose over the year, surveys by VISA and BBA reported a slowdown in consumer spending and borrowing respectively, and the official Household Savings rate fell to just 1.7%, the lowest since records began in 1963. This suggests that the recent consumer boom was financed by a combination of running down savings, or borrowing, which has now reached an extreme level. As real incomes fall the reining in of spending could point to a further slowing of growth. Governor of the Bank of England, Mark Carney, previously said that he’s keen not to ‘punish’ consumers further by raising borrowing costs.

The European Central Bank (ECB) has a different case to answer. After years of disunity, the UK’s decision to leave has united Europe in a desire to prove us wrong. Falling unemployment levels contributed to rising economic growth and record levels of business and consumer confidence in the leading countries but with little impact on wage inflation. Against this back-drop President Draghi’s optimistic comments were taken as a sign that he was considering reducing the amount of monthly bond purchases, provoking an immediate rise in bond yields. This contrasted with comments earlier in the week where he rejected calls for monetary tightening, and resulted in ECB officials signalling that the market had ‘misjudged his latter comments’.

The story of the month was that accommodative central bank policies are approaching the end game. That might be true but we feel that it will be a long and cautious process, quite likely taking years rather than months, and that’s making the big assumption of continuing economic growth. Markets continue to look fully valued and in need of a correction but the need for income could still drive prices higher in the meantime.

We reduced our exposure to property funds by around 50%; depending on the portfolio’s risk category the proceeds were re-invested in a money fund, an absolute return fund or equities.

With 10-year bond yields stabilising at around 1% we switched the additional bond fund bought in January into the Royal London Short Duration Credit fund; this fund will offer more protection if yields rise whilst still providing some income. Subsequent to the switch UK bond yields rose to 1.3%.

Our higher-risk portfolios saw a switch from the Newton Asian Income fund into the Guinness Asian Equity Income fund, which is now available to us, and a purchase of the AXA Framlington Biotech fund.

We bought the Unicorn Mastertrust fund across most portfolios; this is an unconstrained fund that invests in investment trusts.