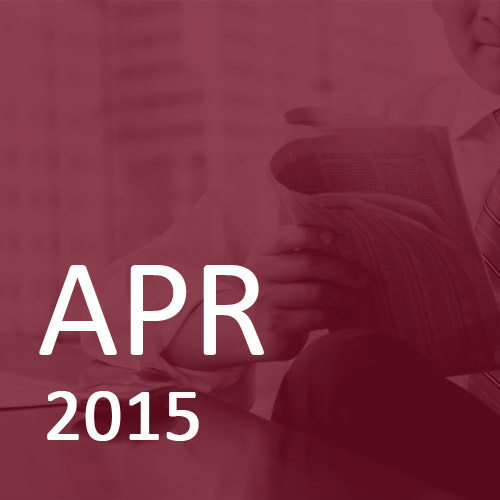 Market volatility continued for the third consecutive month this year! Stockmarkets in the UK, US and Europe reached fresh record highs but all ended the month below their peaks. Japan made a 15-year high and gained around 6% in Sterling terms. The US and Europe were up between 2-3% but the UK’s FTSE suffered from vertigo as it hit 7065 and ended the month nearly 2% lower.

The UK Budget proved to be little more than pre-election posturing and in market terms was over-shadowed by the US Federal Reserve meeting later the same day. The Fed’ mischievously changed the text of their statement to accommodate a rise in interest rates whenever they deemed appropriate but then lowered their forecasts for growth, inflation and the path of projected interest rate rises.

The topsy-turvy world of fixed interest continued. Arguably the most over-valued asset class made further gains as the European Central Bank stuck some more money in the bond charity box; UK conventional gilts gained 2%, but the index-linked variety rose by 3.75%.

On the geopolitical front fresh conflict in Yemen caused a spike in the oil price and unsettled equity markets whilst Greece continued to successfully negotiate nothing new and had little effect on bonds or equities.

We feel that the current volatility across markets is warranted and expect it to continue and probably increase. The fall and rise and fall again of the oil price adds to the uncertainty. However, most of the moves are due to markets becoming increasingly over-valued relative to their earnings outlook but still supported by central bank buying. The perverse situation is still that poor data is taken to suggest that Quantitative Easing and lower interest rates will remain in place for longer, which is good for bonds and equities, and consequently good data is bad for equities!
The whole affair of Greece and Germany trying to negotiate some form of settlement has become such a massive yawn that there’s a danger of Petros crying ‘Wolf’ once too often. At some point something significant could happen but it could take a while before the full implications hit home.
The UK election campaign is now officially underway. Whilst cynics will dismiss much of what is said as no more than campaign bluster there are risks that random quotes will unsettle equity sectors (banks and utilities are usually the fall guys) and, on a larger scale, could see swings in the UK’s bond and currency markets.
We have some concerns that the country that’s supposed to be leading the world out of recession, the United States, is stalling. This may be a temporary lull hurt by the snowy winter, but of all the major data classes only the employment data is coming out stronger than forecast.

Last year we positioned the portfolios to benefit from further market gains but with less volatility than the market. We did this using a combination of equity income funds, absolute return funds and a relatively high weighting in commercial property.

After further gains in the stockmarket we have reviewed the level of risk that we are happy running, also bearing in mind the upcoming UK general election. Generally we’re happy with our current cautious stance but we have reduced the risk further on our high-risk funds. Here we switched out of the M&G Global Dividend fund, which is over 50% invested in US equities, into the less volatile Standard Life UK Property fund.

We think that UK equities offer better value than most markets and are well placed to benefit from a growing economy. We accept that uncertainty during, and possibly after, the general election could cause some underperformance but feel that further gains will come once the politics are sorted.

With the level of central bank manipulation it’s impossible to call the top in any market, but we expect a reversal at some point and are keeping a portion of the portfolio in low-risk absolute return funds ready to switch into good long-term investments when opportunities arise.