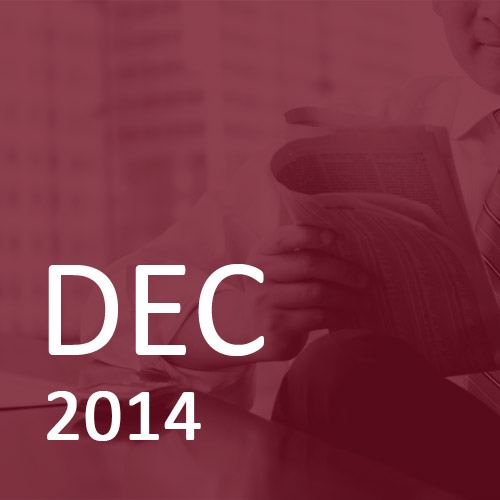 OPEC failed to agree a cut in production, sending the oil price to its lowest level since the start of 2009. On the one hand this is seen as good news for oil importers, manufacturing companies and consumers, who are experiencing a rise in disposable income. On the flip-side this is having a calamitous effect on energy-producing companies and countries.

Even before the full effects of this latest fall are seen, central banks have been revising down their inflation forecasts. Governor of the Bank of England, Mark Carney, hinted that UK inflation might well fall below 1% over the coming months.

The ECB lowered its forecasts for GDP and inflation, but still failed to agree on implementing a full programme of quantitative easing. Markets have accepted the prospect of action early next year but patience with Draghi’s constant assurances is wearing thin.

The new monetary stimulus announced last month by the Bank of Japan pushed the Nikkei through the 17,000 barrier for the first time since 2007. Shares fell briefly on news that Japan had fallen back into recession but rallied as Prime Minister Abe called a snap election for December; the index is currently testing 18,000.

In the UK the Autumn Statement was aimed more at voters than markets. However it reinforced the view that for all the talk of austerity over the past few years the Country remains massively in debt and the real cuts in public spending are yet to come-after the election.

The US stockmarket is fully valued but with an economic backdrop that compares well to the rest of the world. Growth in the third quarter was revised up to an annualised 3.9% and shares continued to make new highs.

In stark contrast Europe is a shambles with politicians fiddling as Rome, Paris and even Berlin metaphorically burn; deflation beckons and data suggests a strong chance of a return to recession. Having said that, the German Dax continues to make fresh highs.

Shares in the UK look to be on a firmer footing with positive growth and less stretched valuations. There’s likely to be a period of uncertainty ahead of May’s general election where the composition of a probable hung parliament will dictate whether or not the UK remains in the EU.  This uncertainty might deter investment in the UK but could also provide opportunities to invest for the longer term.

To some, this may seem to paint a rather bleak picture yet circumstances such as these are where the experience and expertise of Discretionary Investment Managers can turn things on their head and really add value. So long as interest rates remain at historically low levels, in many cases offering negative returns after adjusting for inflation, then other asset classes will offer attractive alternatives. Yes, we do see another year of volatile markets but we will look to exploit these buying opportunities within what we believe will be an overall future trend of rising markets.

We have a general underweight bias to fixed interest funds; on our lower risk funds that require exposure to the sector we are holding a blend of government, investment grade and some high-yield bonds as well as a fund where the income will adjust broadly in line with changes in interest rates.

Although fixed interest funds have performed well this year we prefer the higher income on offer from commercial property and the longer term gains offered by equities.

We continue to favour Japan and Asian markets to Europe where political and economic instability looks set to continue.

We remain overweight in absolute return funds and have added a further fund to the stable. These funds offer a low volatility alternative to cash, but with a higher return, and allow us to keep funds ready to put back into the market as opportunities arise.