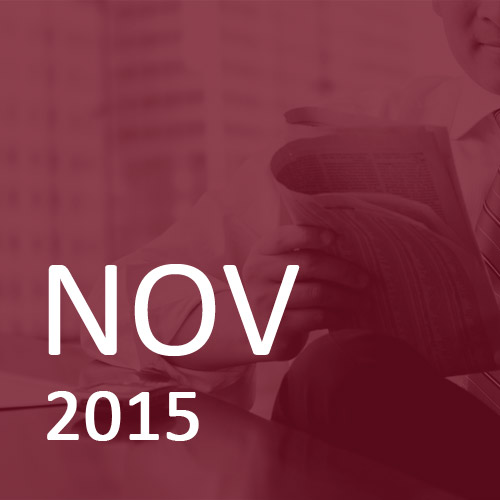 October witnessed a marked divergence in monetary policy. President of the European Central Bank, Mario Draghi, announced that the ECB had discussed cutting interest rates and “…were ready to act if needed if economic recovery disappoints”. By contrast the US Federal Reserve meeting left the door open for a rise in interest rates in December. Although economic data was mixed a further fall in US unemployment to 5% strengthened expectations of a rate rise.

Equity markets rallied, to varying degrees, over the course of the month. Japan led the way, rising by nearly 8% in Sterling terms; Russia, Asia and some emerging markets gained 5% and developed markets weren’t far behind. The US S&P 500, backed by a strong dollar, regained all of August’s losses whereas Europe and the UK fared less well, remaining 4% lower than at the start of August.

There was a greater disparity in global fixed interest; European bonds welcomed Draghi’s comments with a fall in yields to the extent that there is now a record €2.3 Trillion of Eurozone debt with a negative yield (investors are paying to lend money!). Bonds in the United States understandably reacted to the intermittent but growing risk of a rise in interest rates, the benchmark 10-year bond now yielding above 2.25%. Despite Governor Carney’s most recent hint that UK interest rates might not change in 2016 gilt yields sided with the US, returning above 2% on 10-year bonds.

China announced its thirteenth 5-Year Plan which focused on re-balancing from ‘old’ industrial businesses to a ‘new’ consumer-led economy. It also announced a further cut in interest rates as growth and inflation continued to slow.

Finally, a slow-burner to watch for next year. An anti-austerity alliance has defeated the newly formed Portuguese government’s opening programme. This was effectively a vote of no confidence and could lead to the President either asking the alliance to form a new government or calling for a fresh election to be held. After the German-led Eurozone spent much of this year slapping Greece down it might have a new, more significant fight on its hands next year.

The flip-flopping ‘Forward Guidance’ offered by the major central banks is almost beyond parody. Although the volatility presents opportunities it has become pointless taking comments on the timing of interest rate hikes seriously. Luckily this suits our style of developing robust portfolios that aim for performance over the longer term but with lower than average volatility.

Overall things haven’t changed much. The US and UK central banks are still expected to raise rates-one day, the Chinese economy is still slowing and both of these factors continue to weigh on emerging markets and commodities. None of this is new and therefore should already be priced into markets.

October’s rally wasn’t a surprise after the recent collapse in equity markets and historical trends suggest that this could continue into the year-end. However, with the European Central Bank meeting in early December and the US Federal Reserve deciding on any rate move in mid-December we could be in for a rocky month. We don’t believe that the level of outstanding global debt will allow much scope for rate rises without precipitating a very nasty crash. This is something that central bankers are well aware of and take into consideration at their meetings.

Although high-yield bonds have recovered the worst of their losses we remain cautious of the sector where leverage has been increasing and default rates starting to rise. The demand for income has meant that too many bonds have been issued on the sellers’ terms (with few or no covenants)  to retail investors who don’t always understand what they’re buying (High-yield used to be referred to as ‘junk’ before the marketing guys got involved).

We further reduced our exposure in fixed interest; in some cases we affected this by switching into funds with a lower sensitivity to interest rates, but on our higher-risk funds we sold fixed interest funds outright.

Having used the recent market correction to add to our weighting in UK smaller companies we further increased these funds during the annual rebalance.

We increased our weightings in UK equity income funds across the portfolios. This is a sector rich in talent with a proven ability to add value over the longer term and with several top funds offering more income than fixed interest funds.

We continue to run overweight positions in property and absolute return funds, mostly in place of fixed interest funds